How we talk about sport is changing. Whether you follow racing, tennis, golf, football, NFL, baseball or pretty much any mainstream sport, you have been hearing about percentages, ratings, sectional times, expected goals and a whole host of metrics for years. This is the information age and humans crave information. Our minds have become very good at digesting it and making sense of it. We now want to analyse how performance is driven rather than just sitting back and watching it unfold.

Eventing is a fantastically complex sport from that point of view. Three very different phases which juggle the array of strengths required of the eventing athlete. We can spend hours in the minutia (and believe me, we do!) but how far can we get with one sophisticated metric that intelligently assesses one detail – competitiveness?

You’re about to find out because the EquiRatings Eventing Elo does exactly that. It measures the quantity and quality of a horse’s competitiveness. The rating goes up when you beat highly rated opponents and it drops when opponents beat you.

Ireland v. the Gold Medallists at World and Olympic Games

This series excludes European Championships as we are also covering many non-European nations.

To get a feel for the EquiRatings Eventing Elo, let’s look back at the last four major championships. The graph above shows the average Elo ratings (prior to the competition) from competitors of the nation that won team gold (this does include athletes competing as individuals, as does the competition average). In 2012 and 2014, the gold medal winners were Germany and their average Elo rating was above 700. The same goes for the 2018 WEG gold medalists, Great Britain. France, in 2012, are the only nation to win team gold averaging an Elo below 700, but they are only just below that line.

The EquiRatings Eventing Elo at World and Olympic Games 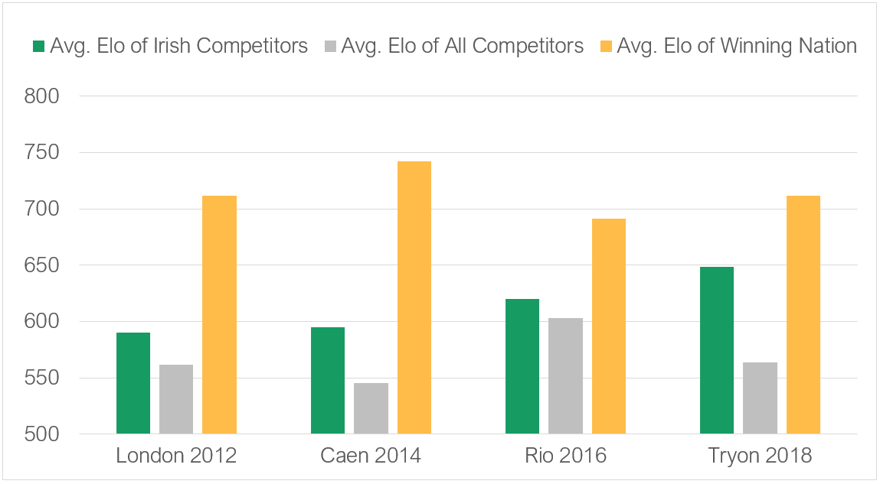 Irish fans will remember 2018 with a bit of pride. Their WEG team silver was a bit of history, but the EquiRatings Elo tells us that it was also by far their strongest team to contest a major championship in the recent past. What is most notable is the gap between the average Irish Elo (green bars) and the average Elo for that championship overall (gray bars).

The individual hero from the 2018 WEG team was Mr Chunky, who took the individual silver medal. He was rated 683 prior to starting at Tryon, just 7 points behind teammate, and eventual 5th place, Horseware Stellor Rebound.

Mr Chunky flew home from Tryon on 728, the same as Horseware Stellor Rebound who had started the competition rated 7 points higher than his teammate.

Mr Chunky and Padraig McCarthy entered WEG 2018 on a 683 Elo but that put them as the second-highest Elo for Team Ireland entering that event, behind Horseware Stellor Rebound.

Elo at Time is each horse's pre-championship Elo.

Mr Chunky and Horseware Stellor Rebound, who not only finished in the top five but also were the bedrock of the team silver, are the highest-rated Irish horses to line-up at a major championship in recent history. Rewind the clock to 2016 and the country were celebrating a new superstar in Cooley Rorkes Drift, partnered by Jonty Evans. They took a top-10 finish, but they are also the third-highest Irish combination to contest a major based on the EquiRatings Elo. Portersize Just A Jiff was the top player going in to both 2014 and 2012.

Special Mention for the Special Star

Irish fans and eventing form wizards are thinking it, so we’ll answer it. What about Rioghan Rua when she won her individual bronze at the 2019 European Championships and slotted in just behind Ingrid Klimke and Michael Jung? The answer is that she lined-up with an Elo of 673 and she sauntered out on a whopping 706.

For Irish fans who believe in luck, you might not need to. The EquiRatings Elo has been doing a pretty good job of pointing you in the right direction. If 666 is an unlucky number, 665 is the opposite for Irish championship contenders. In the history of the EquiRatings Elo, only five Irish combinations have lined-up with a rating of 665 or higher, and this is how they performed:

So now we know, if an Irish horse lines-up with an EquiRatings Elo of 665 or higher at Tokyo 2021 they will be finishing in the top ten…! We jest. We are a data company and this is where you have to be careful with statistics. However, the facts are the facts and if the Irish can produce some strong form horses, they have shown a tendency and temperament to deliver a world-class performance.

Do they have any horses with an Elo in the high 600s? The answer is an emphatic yes. Their stalwart, Horseware Stellor Rebound sits on a lifetime high of 759. The caveat is that he is not qualified and nor has he been longlisted, signaling that he may be sticking with the short formats at this stage in his career. 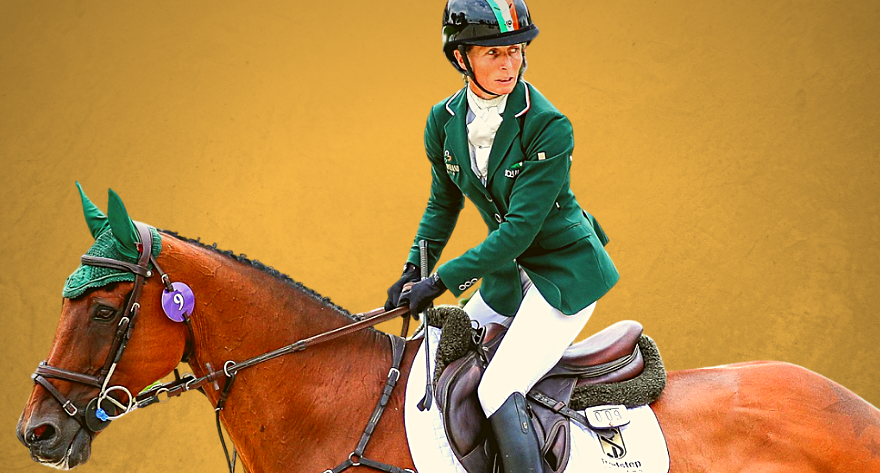 Rioghan Rua has dipped below 700 to 683 with a couple of quiet runs in 2020, but this looks sure to have been a tactical play with her and the reigning European bronze medalist could be the first Irish horse to line-up at a championship with an Elo in the 700s.

A horse on a strong and consistent upward curve into similar territory is Imperial Sky. He’s now on a career-high of 679 and poses a similar threat of potentially being in the 700s come Tokyo-time.

Padraig McCarthy has a couple of older stars in his armoury in Leonidas II and Mr Chunky. Like Rebound, these horses have not been listed in the Irish Tokyo squad indicating that we might not see them at championships, but they are the only other two horses that are currently above that 665 threshold.

Of the longlisted horses, in addition to Rioghan Rua and Imperial Sky, the only other horse currently above 600 and displaying the potential to move into the higher 600s by Tokyo is Horseware Woodcourt Garrison for Sarah Ennis. They currently boast an Elo of 623 and are on an upward curve. Of course, no team will be selected on Elo ratings alone but it is certainly an interesting way to look at the contenders.

Sean White is the most senior EquiRatings employee and runs the company's data flows. He lives in Dublin and, prior to this role, Sean managed ETL processes at the Aon Centre for Innovation and Analytics and at IBM.