They have jumped in 25 FEI international events together. In their first two events, both at the now two-star level, they knocked a rail on both occasions. In their next 23 show jumping rounds, 12 of which took place at the now four-star level, they knocked only TWO fences in total. They are on a run of nine straight show jumping rounds without a jumping fault. The horse is the 11 year-old mare Shanaclough Contadora and the rider is Japan’s Kenki Sato.

How we found them

The smart thing about this is not our ability to recite a competition record, it’s about how we found this jumping gem. OK, the real plaudits should go to Kenki and his wondermare (they finished 2nd in the 2020 Barroca d’Alva CCI4*-L amongst other competitive results), but I think we can all agree that we’d much rather talk about data mining than jumping technique…?! On a serious note, I think you’ll find this interesting and it’s applicable to your own horses (or ones that you follow).

The Sample: We looked at all horses that competed in 2020, have had at least 6 FEI internationals and their last run was at four or five-star. This gives us 885 current, top level horses to analyse.

The Metrics: We’re keeping this simple, so it isn’t flawless. The first is the SJ6 which is the average number of jumping faults from a horse's last six SJ completions. This is very simplistic by itself as it doesn’t account for any factor of course difficulty.

We therefore calculate the course par average (ACP). A single ‘course par’ is the average number of jumping faults from all competitors who jumped a course; ‘That course averaged 5.2 faults per horse,’ for example. We end up with six course pars, one for each of the horse’s last six SJ rounds.

As the final step, and this is how we found Shanaclough Contadora, we subtract the course par average from the horse’s SJ6 to get the difference to par (DTP) – a number which changes for each horse every time it completes an SJ course.

A difference to par (DTP) can be calculated on a variety of things. We use it for cross-country jumping clear rates and it could be used for dressage and time penalties too if necessary.

15 horses who keep the rails up over difficult courses

Horses who out-perform 'par for the course' based on the EquiRatings DTP metric for show jumping. 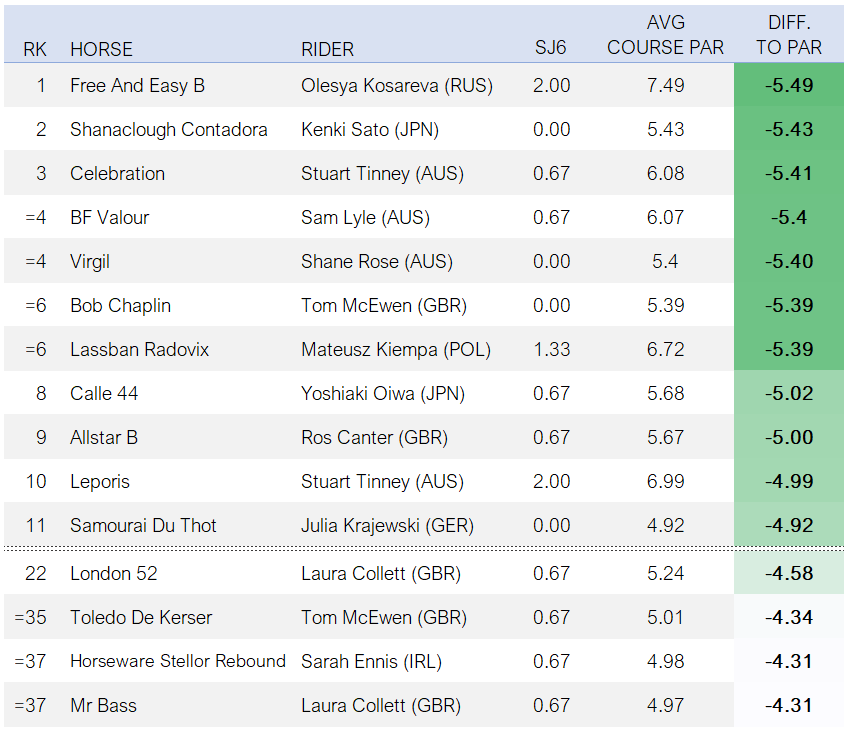 Horses that competed internationally in 2020, have at least six international starts and contested their most-recent event at four- or five-star level.

You don't have to be perfect to be awesome

The beauty of the difference to par (DTP) is that the SJ6 doesn’t have to be 0. The reigning World Champion, Allstar B, has an SJ6 of 0.67 (one rail in their last six runs) but he is still one of only nine horses in our sample with a DTP of -5 or lower (see table below). Samourai Du Thot, ranked 11th on our list, has an SJ6 of 0 but a DTP of -4.92. I wouldn’t be advising that you jump to any conclusions about Allstar B being a ‘better jumper’ than Samourai Du Thot because of the 0.08 difference in their DTP. However, you are now more informed than you would be by simply comparing the six clears from Samourai Du Thot (SJ6 = 0) to the five clears and one rail down from Allstar B (SJ6 = 0.67).

Why we didn't lead with the highest-ranked DTP

A quick glance at our table and you’ll see that it is the Russian-campaigned Free And Easy B that has the best difference to par show jumping value from our sample. Their SJ6 (2.00) instantly raises suspicion because this means they are averaging a fence down every two rounds. It is their course par average (7.49) which really impacts their difference to par (-5.49). This means that while their own average is good, it is more a case of their opponents producing high faults that is making them look exceptional.

The more you know

As mentioned earlier, our predictive analytics metrics would account for even more factors such as the quality of the opponents and the recency, or trend, of performances. But the power of data analysis is that we can instantly create a picture from hundreds, or thousands, of horses. We can confirm a lot of what we thought we knew, dispel some of what we questioned and sometimes learn about some new information or evidence. When using any form of analysis, always know how the metrics are calculated and what they are telling you.

Sam is a co-founder of EquiRatings, event rider on the Irish high performance team, and member of the silver medal-winning Team Ireland at the 2018 World Equestrian Games. As an equestrian and analyst in Management Science and Information Systems, Sam believes in both art and science. He lives in Ireland with his super-groom wife and two young sons.