I mean, we know better - 2020 was actually pretty terrible, all things considered. But in sports, victories were still celebrated, dreams were still achieved and athletes still pushed themselves through the daily, unseen grind of training. We wanted to highlight some of those 2020 sporting victories in a new way. We wanted to know, despite all of the year's grim headlines, who quietly chugged along to make the most of the disjointed, interrupted and abbreviated eventing season?

We used our new rating, the EquiRatings Eventing Elo, to ask: Who made the biggest gains in 2020? The Elo is a rating which rewards horses who are consistently competitive, taking into account the quality of competition they beat, the level at which they beat them, and the field size they were up against (among other things). It’s a single, well-established number to turn to for answers.

We are not looking at who has the current best Elo. Instead, we wanted to know who had the biggest Elo gain during the 2020 season.

You won’t see the horses that have been competitive for years at the top levels of the sport (i.e. the “big names”). Those guys are already working with very high Elo ratings, think 700-900s, so their gains over time are less dramatic (part of the Proven Ability factor).

Before their first international competition, horses are assigned a starting Elo of 300, that’s the average rating on the Elo scale of 1 - 1000. What you will see on our top 10 “gainers” list are horses that started 2020 in the 200-400 range, bordering that 300 average. These horses had the Elo real estate ahead of them to move up and a responsive Elo to reward them for consistently competitive 2020 results.

Horses who made the most of the 2020 season

The horses who made the biggest leaps in performance last year based on the EquiRatings Eventing Elo. For context, only the best horses in the world break into the 900s and the all-time best Elo is a 973 by La Biosthetique Sam – FBW (Michael Jung). 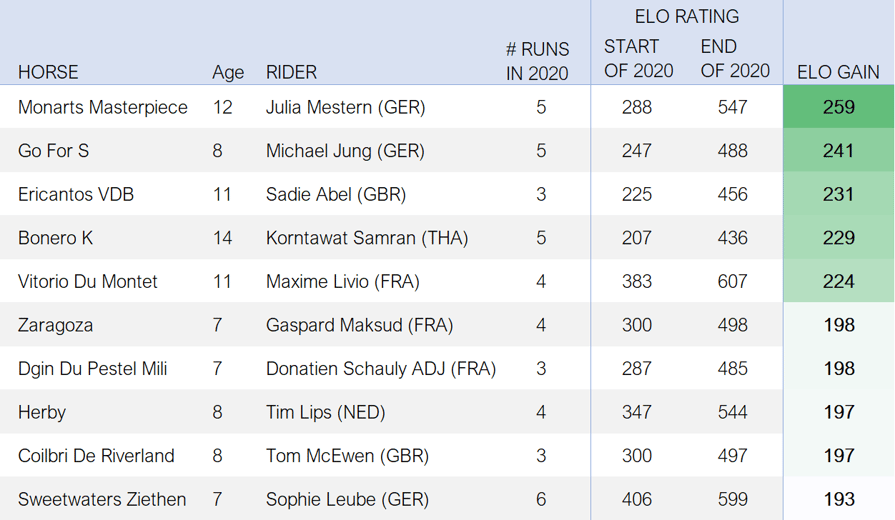 As of 6 December 2020, based on international runs only.

Monarts Masterpiece is 2020’s Elo comeback kid. Last year was quite a turnaround.

In 2020, Monarts Masterpiece, still just 12, moved on to Julia Mestern (GER) and they were the stand-out combination of the year in terms of improved form. This season at the international level, the pair had five consecutive clear-jumping cross country rounds, they improved their show jumping clear rate from 50% to 80% (only one rail down from 5 rounds) and they lowered their season dressage average by nearly 3 marks.

Top placings were delivered as a result and Monarts Masterpiece’s Elo climbed in steady increments after each event. Finishing 2020 back at the 4*-S level (Baborowko where he finished 5th out of 51 starters) and back in the 550 Elo range, the graph below illustrates the comeback of Monarts Masterpiece, up 259 points and nearly doubling his 2019 Elo.

Elo over time for Monarts Masterpiece, Go For S, and Ericantos VDB

Click on the data points to see more details.

Ericantos VDB had no international runs in 2017.

Go For S and Michael Jung

In 2019, however, cross country time penalties and show jumping rails kept Go For S from being competitive. She averaged a finishing score of 61.1 and ended the season with an OBP6 of just 38%, meaning she beat only 38% of her opponents across her last 6 international events of the year. Elo is centered on the quality of horses you beat and the quality of horses you lose to; if you’re not beating many horses at all, your Elo will show it. Go For S ended 2019 on a 247 Elo.

Back with Michael in 2020, Go For S climbed up to an OBP6 of 66%, a percentage which is still weighed down by her final run of 2019 where she finished 58th. In contrast to 2019, Go For S started her 2020 season by beating horses like Calle 44 (Yoshiaki Oiwa), a 700s-rated horse, at Luhmühlen 3*-S. In her highest 2020 placings, the podium finishes listed above, Go For S bested horses with Elo ratings in the 600s, like Eclips (Tim Lips) in the Strzegom 3*-S and Amande de B’Neville (Julia Krajewski) in the Strzegom 4*-L, Go For S's first time at the level. Those high placings against stiff competition, especially at the 4*-L level, contributed the biggest Elo gains for Go For S.

Before the 2020 season, Ericantos VDB competed at the international level only three times over four years. In those events, he was either retired cross country or finished in the bottom 50% on an average finishing score of 65.8.

In 2020, Ericantos VDB completed all 3 of his internationals starts and he did so with an average finishing score of just 30.9. He FOD’d in two of his events and added just 0.8 SJ time penalties in his final 2020 appearance. Among big fields, he finished in the top 10 in all three events.

The 5th place finish at Burgham 3*-S gave Ericantos VDB his biggest Elo gain. He entered on an Elo of only 225 off the back of 2019, but went on to beat many horses that day who had higher Elos than him. In his 9th place finish at Thoresby Park, his first 3*-L, Ericantos VDB beat horses like Vassily De Lassos (Andrew Hoy), a 700s-rated horse and Cooley Ramiro (Will Oakden) in the 600s; a very strong 2020 finish to punctuate Ericantos VDB’s upward Elo trend.

Coilbri De Riverland is the only horse in our top 10 Elo gainers to have no international starts prior to 2020. The 8 year-old started his international career on an Elo of 300, like all horses do, and he never looked back, racking up 197 Elo points over the course of his 3 strong results, including a 2nd at Wellington (GBR) 3*-S and a 4th at Lignières 3*-L.

Zaragoza was the other horse in our top 10 who started 2020 on a clean 300 Elo. She had one 2019 start but was withdrawn before cross country, meaning the run had no effect on Zaragoza’s Elo, good or bad. The 7-year-old entered 2020 with an untouched 300 rating and it was all up from there, including 2nd place finishes at Thoresby Park YH3*-S and Bicton 3*-L.