Stacking the Odds with the ER Elo

A nice little 2020 perk for the eventing world (dare I say so myself!) is that EquiRatings quietly launched a new metric. We have taken the rating methodology used in chess, amongst many other sports, and applied it to eventing. This gives us one number by which to judge a horse and compare him/her against others. It is called the EquiRatings Eventing Elo.

As we all know, the term ‘horses for courses’ is appropriate in this game more than most. Each horse has a different portfolio of strengths and weaknesses, from dressage divas to cross-country speedsters. The consequence of this is a vast library of EquiRatings metrics. But we also shouldn’t complicate matters too much either. This is important. Too often we complicate matters, especially when the bare facts aren’t in our favour.

In this article I want to put the Elo to work. The opportunities are unlimited, but for now I will focus on the decision of whether or not to aim a horse at a CCI4*-L. We give five-star plenty of coverage, but the four-star long is obviously a more commonly targeted competition level and there is a great balance to be struck between risk and reward.

For many, the reward at CCI4*-L is the qualification for the next level. Too often I feel that people are chasing qualifications without thinking constructively about whether it is the best move for that horse at that moment in time.

Assessing the sport between 2015 and 2020, 51.2% of starters in CCI4*-L competitions achieved a MER, meaning that 48.8% did not. It’s pretty much a coin-flip chance on paper. However, as one can readily accept, not every competitor carries the same chance of success or failure.

The graph below shows competitors grouped by their Elo rating coming into a competition. We then created two groups, competitors that achieved a MER (yellow) and those that failed (blue). The most common grouping is those with an Elo rating of 350 to 399. Very few competitors contest a CCI4*-L with an Elo higher than 650 – if your horse is above this threshold then it is a pretty elite equine athlete.

Competitors were grouped by their pre-competition Elo rating. The competitors in each Elo group were then divided into two categories: did they end up achieving a MER at the competition or not. 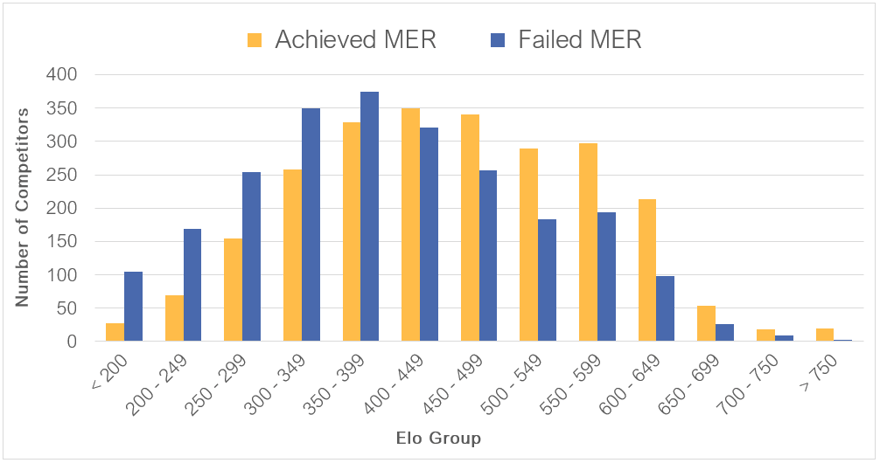 Note that very competitive and successful horses will achieve an Elo of 400 long before they are even qualified for a CCI4*-L (junior horses and Le Lion d’Anger graduates etc), so 400 should not mean ‘step-up now’.

Only 16.2% of competitors at CCI4*-L from 2015 to 2020 finished on a score below 40 penalties. We’re now looking at an outcome achieved by 1 in 6 competitors rather than 1 in 2. What is also notable about this sub 40 outcome is how unlikely it becomes for horses with a lower Elo entering this competition level.

For the horses with an Elo of 650 or higher, a sub 40 is actually more likely than not - quite a remarkable observation given the average likelihood of such an outcome. However, for horses with an Elo below 350, we have seen just 32 sub 40 finishes from 1,388 attempts – a rate of just 2.3%.

Competitors were grouped by their pre-competition Elo rating. The competitors in each Elo group were then divided into two categories: did they end up achieving a sub 40 finish at the competition or not. 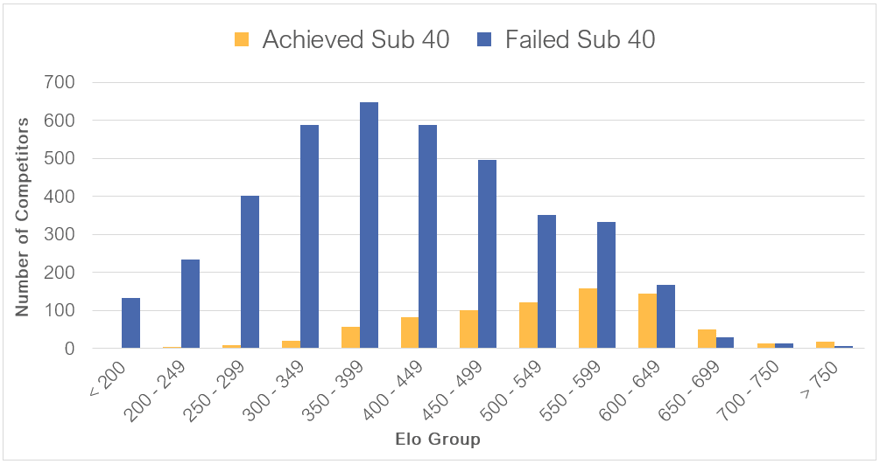 When it comes to achieving a low finishing score, the EquiRatings Elo starts to provide a very comprehensive picture, particularly for the low rated horses. Knowing what a number is telling you is our golden rule. A single metric is only a single layer of information, but there can be great benefit and usefulness within each layer.

Sam is a co-founder of EquiRatings, event rider on the Irish high performance team, and member of the silver medal-winning Team Ireland at the 2018 World Equestrian Games. As an equestrian and analyst in Management Science and Information Systems, Sam believes in both art and science. He lives in Ireland with his super-groom wife and two young sons.