Win count isn’t the only metric of career success. That’s why we wondered which horses have demonstrated success by consistently placing well at the top levels even if they haven't clinched that four- or five-star win…yet.

Here’s how we identified them: 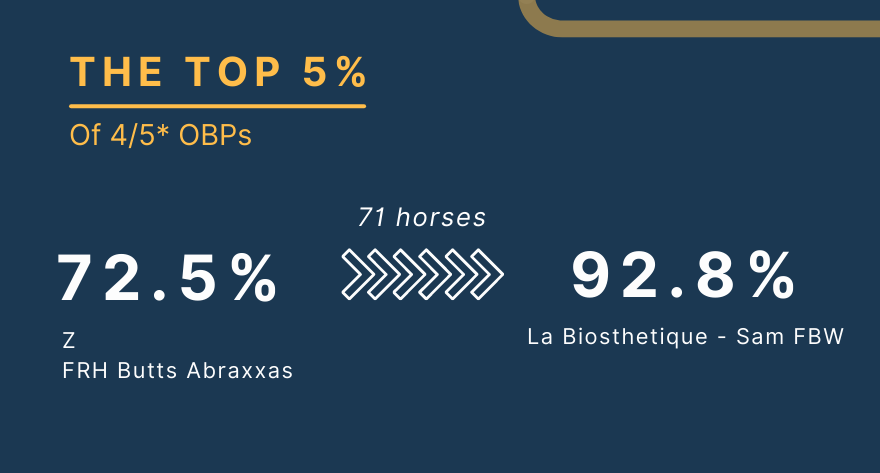 Looking at the top 5%

The top 5% are our guys. We wanted to know who is in the top 5% of four- and five-star horses – is consistently beating a lot of people at the top levels – but just hasn’t won yet?

14 horses in the top 5% have never won at the level. Some of the horses on the list have already retired from the top levels but keep on eye on a few who are still in the game.

These are the horses who are in the top 5% of 4/5* OBPs but haven't registered a win at the level...yet. Some of these horses have retired from the top levels but some still have their best yet to come. These numbers are based on all four- and five-star results from 2010-2020. 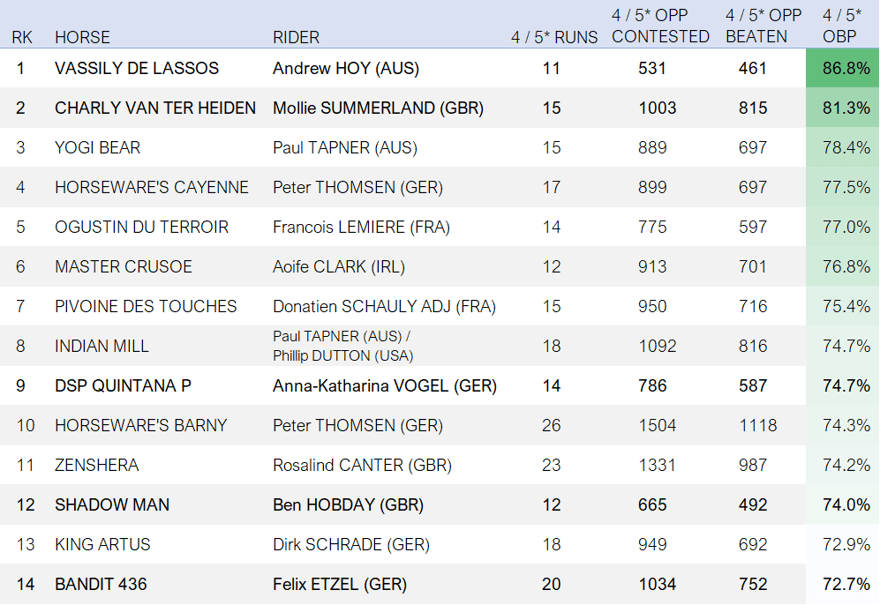 Bolded combinations represent those with the best yet to come, perhaps?

Determining win potential with the HPR

We’ll be using the EquiRatings High Performance Rating (HPR) in our discussion. The HPR, used by high performance managers, is a single number that tells us how strong a single performance was. It accounts for scoring conditions in each phase of the event, course difficulty and the quality of the competitors. It captures the fact that not every win is the same.

A strong HPR is in the 90s but some performances (particularly at major championships when very strong fields come together) go into the 100s. For context, Allstar B’s WEG 2018 win was an HPR of 105 while the Badminton winner that year, Classic Moet, earned an HPR of 108 for her performance.

When we see a horse earning an HPR in the 90s, we know the horse can lay down a winning performance even if he hasn’t yet. He or she has likely just faced some stiff competition.

Here are the horses in the top 5% of 4/5* OBPs - the most-consistent placers at the top levels - who haven't registered a win at the level...yet. Some have retired from the top levels but some still have their best yet to come. 4/5* OBPs are based on all four- and five-star results from 2010-2020.

Bandit 436 has had three podium placings in CCI4*-S classes: A third at Wiener Neustadt Milak in 2017, second at Waregem that same year and third at Marbach in 2018. The horse has registered two HPRs of 90-plus. His second at Waregem registered an HPR of 93, a personal best for the horse, and his third at Marbach earned a 90 HPR. Finishing the 2020 season at the Luhmühlen CCI4*-S German National Championships in October, the 13 year-old Bandit 436 could still be gunning for a win at the four- and five-star levels.

King Artus put in several top performances during his career with Dirk. His two highest HPR performances were his fourth-place finish at the 2011 European Championships which registered an HPR of 99. He earned another 99 HPR from his second-place finish at Wiesbaden CCI4*-S in 2013, where he FOD’d on a 26.3 to place just behind the great SAP Escada FRH (Ingrid Klimke). That Weisbaden finish was King Artus’s last international run and a strong way to punctuate his career, which racked up several HPRs in the high 90s. King Artus had no win during the last decade but was one of the best of his time.

Shadow Man’s second-place performance at Strzegom CCI4*-S in 2019 earned him a very big HPR of 97. There he placed just behind fischerChipmunk FRH (Michael Jung) and placed ahead of the great Bayro (Tim Lips) and FRH Corrida (Andreas Dibowski). Not the “average” CCI4*-S, Strzegom can throw up some seriously strong competition, awarding big HPRs for the ones who finish well.

Shadow Man also appeared in our five-star first-timers to watch based on his Elo rating. We have to be excited about watching him and would be very surprised if this horse isn’t a four- or five-star winner sometime in his career, which is still very much on the rise. 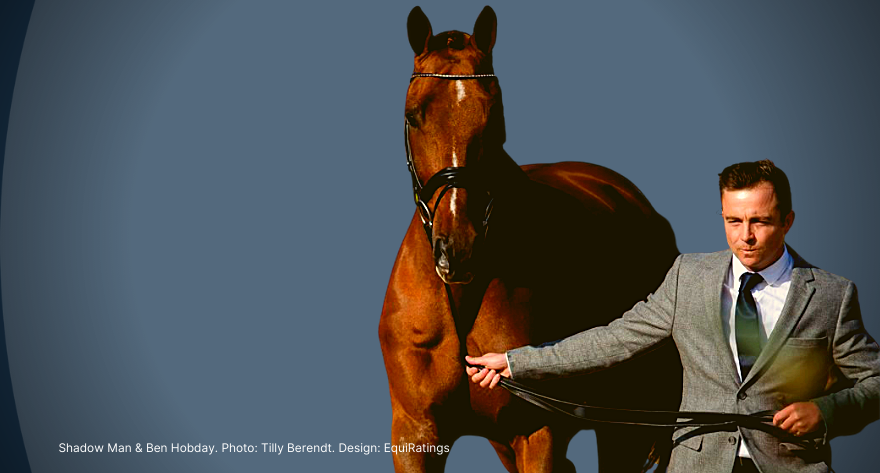 Now 17 years old and in the later years of his top-level career, Zenshera has had six runs at the five-star level and he earned a top-10 finish in all but one of them. Zenshera’s consistency at the top levels has been aided by his stellar cross country jumping record. He finished his 2020 season on an XCJ10 DTP of + 39% (meaning his XCJ clear rate is 39% above average for the courses he has run). That pegs him as one of the best cross country jumpers at the top levels of the sport. Zenshera’s top HPR was a 98 from his fifth-place finish at Belton CCI4*-S in 2018. Ros’s trusty campaigner has had 23 consecutive four- or five-star starts since his first run at the level in 2013, having never looked back from the top levels of the sport.

CONTEXT BREAK: The four horses we just discussed above have never won at the four- and five-star level. However, they all have higher OBPs than these repeated winners and big names:

DSP Quintana P is likely right in the middle of her four- and five-star career. Her highest-rated result was her 14th-place finish at the 2019 European Championships where she FOD’d on a 32.3. That result registered a big HPR of 101, making DSP Quintana P one of only three horses on our list who has earned an HPR of 100-plus (the other two being Charly Van Ter Heiden and Vassily De Lassos).

To beat her German compatriots on her European stomping grounds will likely require a finish in the low 20s which we haven’t seen from the mare yet but she has proven consistent in her ability to place in the top 5 and top 10 against tough competition. We know DSP Quintana P does pack winning potential (that 101 HPR). The fields she contests will be a key factor for a win for her.

Indian Mill was a short-format specialist who earned top placings under two top riders. Though not the strongest show jumper, Indian Mill produced consistent dressage scores in the high-20s and he was consistently fast in the cross country. Toward the end of his four- and five-star career, Indian Mill had a Top Speed Percentage (TSP) of 97%, meaning he was outpacing 97% of his opponents on his fastest days. Indian Mill’s top HPR was a 95 at Gatcombe Park CCI4*-S in 2014 where he finished in fourth with Paul. In all, Indian Mill earned six top-five finishes at the CCI4*-S level and another two at the CCI4*-L level.

A standout performance for Pivoine Des Touches was her seventh-place finish at Jardy CCI4*-S in 2017. There she FOD’d on a 29.2 and earned a personal best HPR of 95. In the long-formats, Pivoine Des Touches and Donatien earned a 91 HPR at the 2017 Saumur CCI4*-L where they finished second and they registered an HPR of 90 from their 2018 WEG performance where they finished in 21st place.

CONTEXT BREAK: Despite not registering a four- or five-star win, these four horses - from Horseware’s Barny to Pivoine Des Touches – all have 4/5* OBPs that are in the mix with names such as:

One of Sam’s horse crushes, Master Crusoe went to serious fights against big fields. Notable placings include a seventh place in the London 2012 Olympics, eighth at Badminton 2013, and a third at Belton CCI4*-S in 2011 when they earned a personal best international finishing score of 30.5. Master Crusoe’s highest HPR came from his Badminton 2013 finish when he registered a 98 HPR.

Ogustin Du Terroir completed every single one of his 31 international starts, which is impressive consistency in and of itself. Six of his last eight internationals were Nations Cups classes, making the horse a reliable team player. Ogustin Du Terroir, however, never reached an HPR in the 90s so while he may not have showcased the most-convincing winning potential, he was a seriously consistent finisher for France.

Horseware’s Cayenne’s highest HPR was a 97 from her fifth-place performance at the 2013 European Championships. There, she added just two XC time penalties to her dressage score to finish on a 29.1. Horseware’s Cayenne was a strong show jumper, knocking only four poles total across her 17 international rounds at the four- and five-star levels. Horseware’s Cayenne earned six top-five finishes at the top levels, contributing to her upper-echelon 4/5* OBP.

Much like Paul’s other horse on the list, Indian Mill, Yogi Bear registered several top-five finishes at CCI4*-S events – seven to be exact. A super consistent short-format horse, Yogi Bear’s two highest HPRs came at Barbury Castle CCI4*-S in 2014 and again in 2016, were he registered a 94 HPR at both events, finishing on the podium each time.

CONTEXT BREAK: No four- or five-star wins, yet our 6th to 3rd place horses on the list all have 4/5* OBPs that rival the likes of: 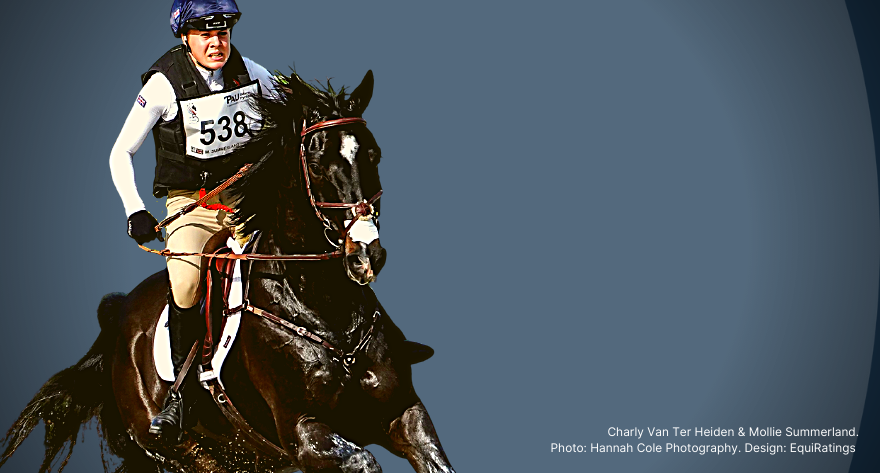 No longer “breaking through” onto the top levels, Charly is now a consistent campaigner at the top levels, making the top 10 at his first ever CCI5* at Pau 2020. Their highest HPR result was a 100 from their Belton CCI4*-S performance in 2019 where they finished third.

Charly and Mollie are an exemplar for Moneyballing the sport. If you can consistently beat four out of every five (80%) of your opponents at the top levels of the sport, you will find yourself in the top 1% of horses. While not the way people always think about eventing, give a performance manager a horse that has contested 15 four- and five-star events against 1000+ opponents and has beaten 80% of them and that’s an enticing addition to the team.

Number one on the list is the fifth-highest 4/5* OBP of all 1389 horses that we started with, ahead of the likes of Fischerrocana FST (Michael Jung), fischerChipmunk FRH (Michael Jung) and SAP Hale Bob OLD (Ingrid Klimke) even without registering a win…yet. 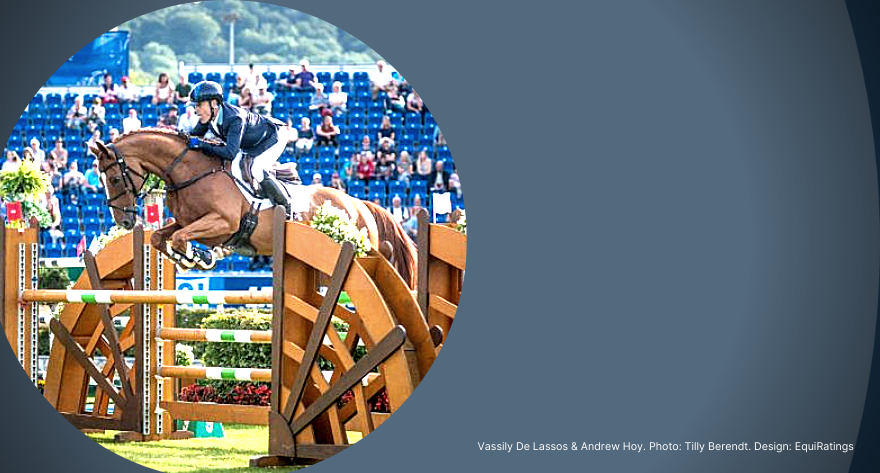 That Aachen 2019 result earned Vassily an HPR of 104, his personal best and a number that is not just good enough to win any ol’ international but which puts horses in play for individual medals at major championships. Vassily has reached or exceeded an HPR of 100 three times, earning a 103 from his Aachen 2018 performance and registering a 100 at Luhmühlen CCI4*-S in 2020 with a third place finish there – all recent form. Vassily’s fourth at WEG 2018 was remarkably only his fourth-highest HPR at 99.

Vassily De Lassos is consistent, capable and elite. A win is waiting. Watch him.