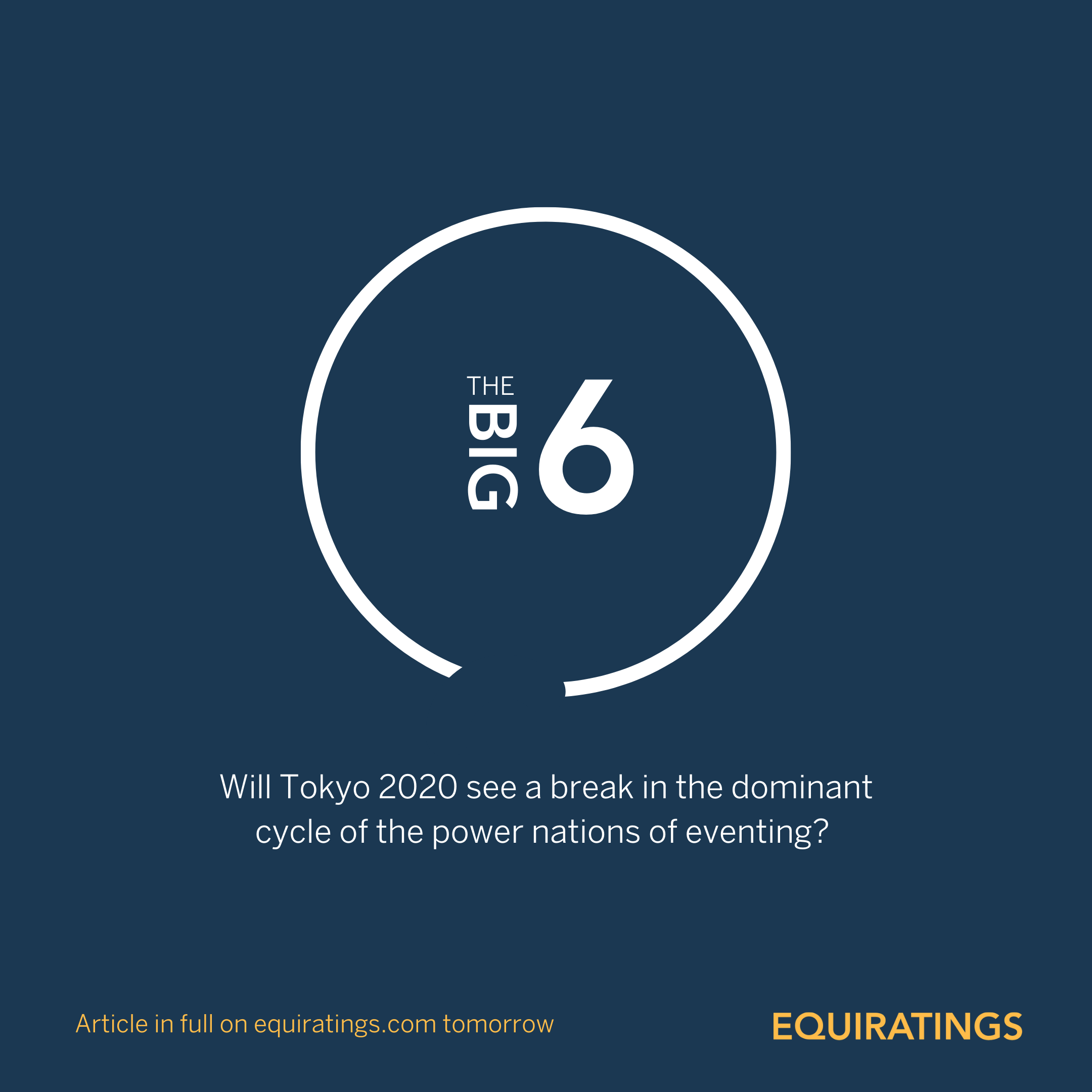 EXCITEMENT FOR FANS BUT NERVOUS TIMES AHEAD FOR THE BIG GUNS

There have traditionally been six big teams in the sport of eventing. Between them, they have won every Olympic team medal available since Los Angeles in 1984 (the 1980 Moscow Olympics was boycotted by a number of major nations). These big six have won all but one of the individual medals on offer too (the silver at London 2012 being the exception). Half of the big six are from Europe (Germany, Great Britain and France) and the other half are made up of New Zealand, Australia and the US. 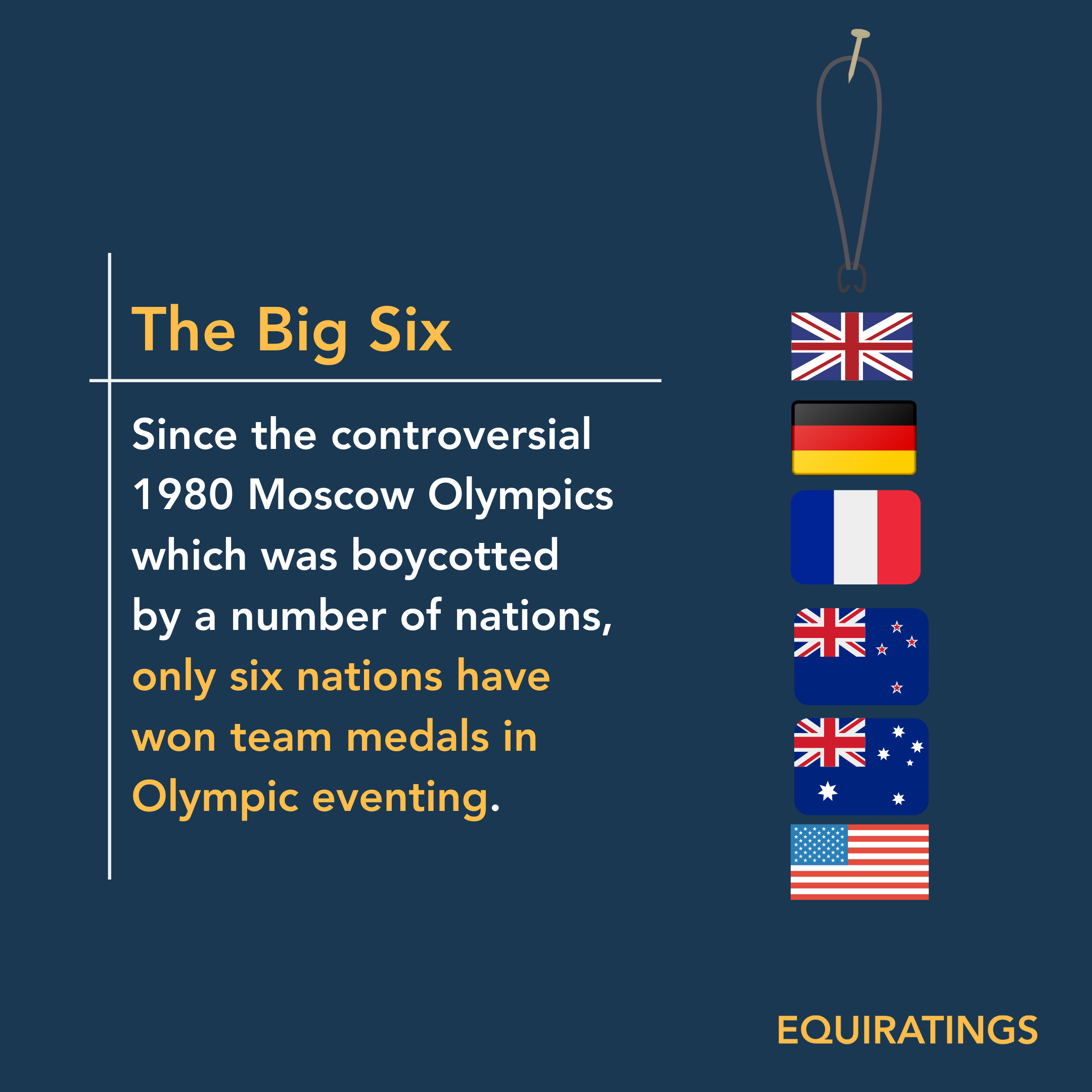 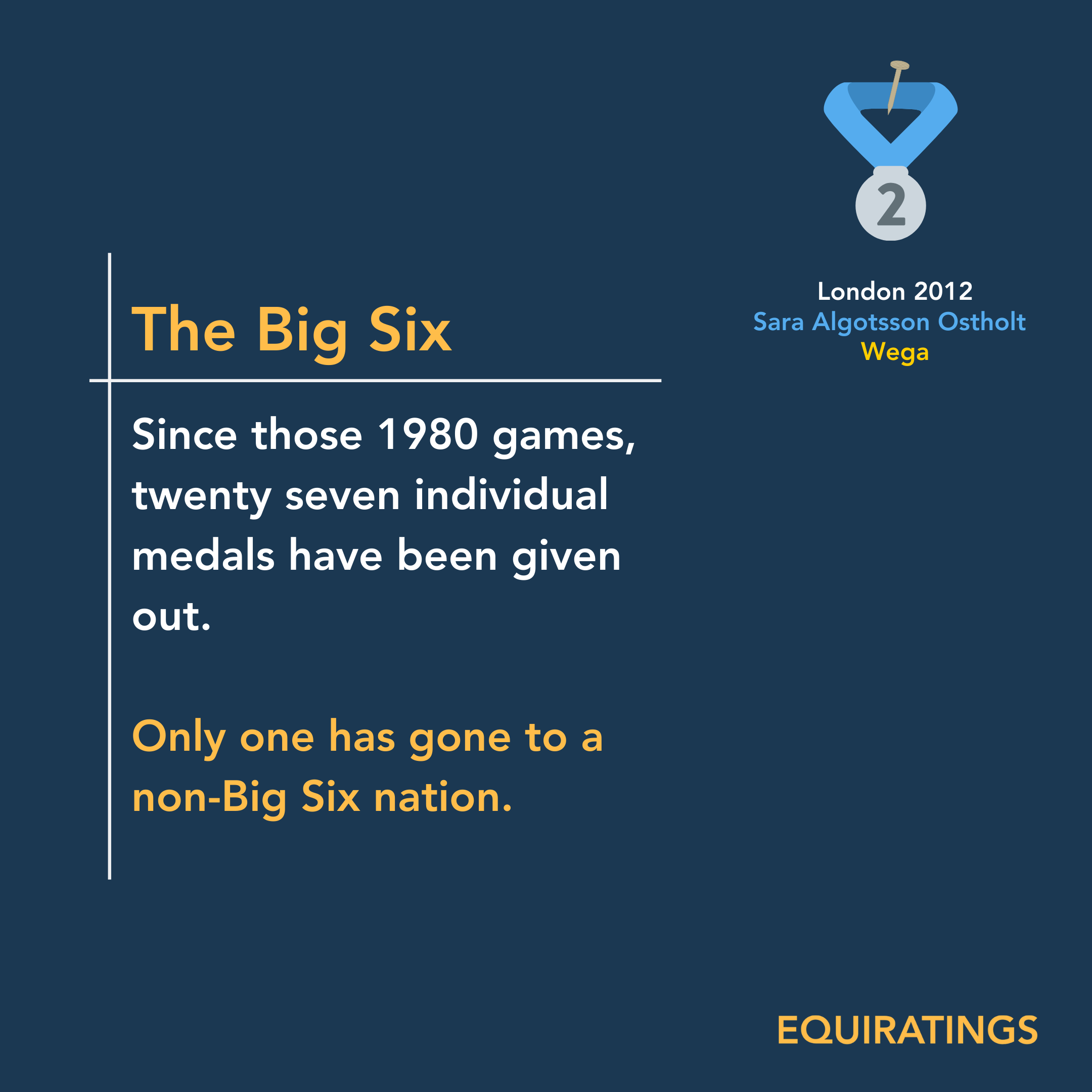 Three counting scores from three. Just how big an effect do we think it will have? Does this change potentially mean we might see a non-Big Six nation on the podium? Let’s look at the likelihood firstly of getting three horses’ home with three clear cross-country jumping rounds.

If you are a member of the Big Six, it is likely that you will have a couple of horses (maybe even three horses) that have an 80% reliability (chance of jumping a clear round). This by the way is high. For context, looking at the favourites for Pau, Alex Bragg’s Zagreb gets to 83% at CCI4*L, Shane Rose and Virgil are at 84% and Tim Price and Wesko are at 85%.  Having three 80% reliability horses therefore, means the big proven names of the sport.

Some quick maths: if we have three horses which have an 80% chance of a clear jumping round and we want to calculate the chance of all three having a clear round we multiply 80% x 80% x 80%. This gives you 52%. Hang on, that is pretty much a coin-toss (and we are talking about the big proven names!). No nation, Big Six or not, can be talking about a guaranteed chance of getting three home with no jumping faults.

We want to consider the possibility of getting a new team onto the podium. While we can’t assess every dressage score and show jumping score in a public forum, let’s look at cross country jumping clears, sure to be a decisive factor. If we imagine for a moment that all six of the Big Six have three horses with 80% reliability (unlikely but possible), what are the chances that four teams from the Big Six will not jump clear (allowing a non-Big Six team potentially to be ahead of them going into the show jumping). When we had three counting scores from four, the chances of four teams with 80% reliable horses not jumping clear was less than 1%. When we see that number in a three from three situation, the chance of four not having clear jumping rounds gets to 32%. A huge jump. A massive change. A massive chance for one of the other nations to take a medal at an Olympics. 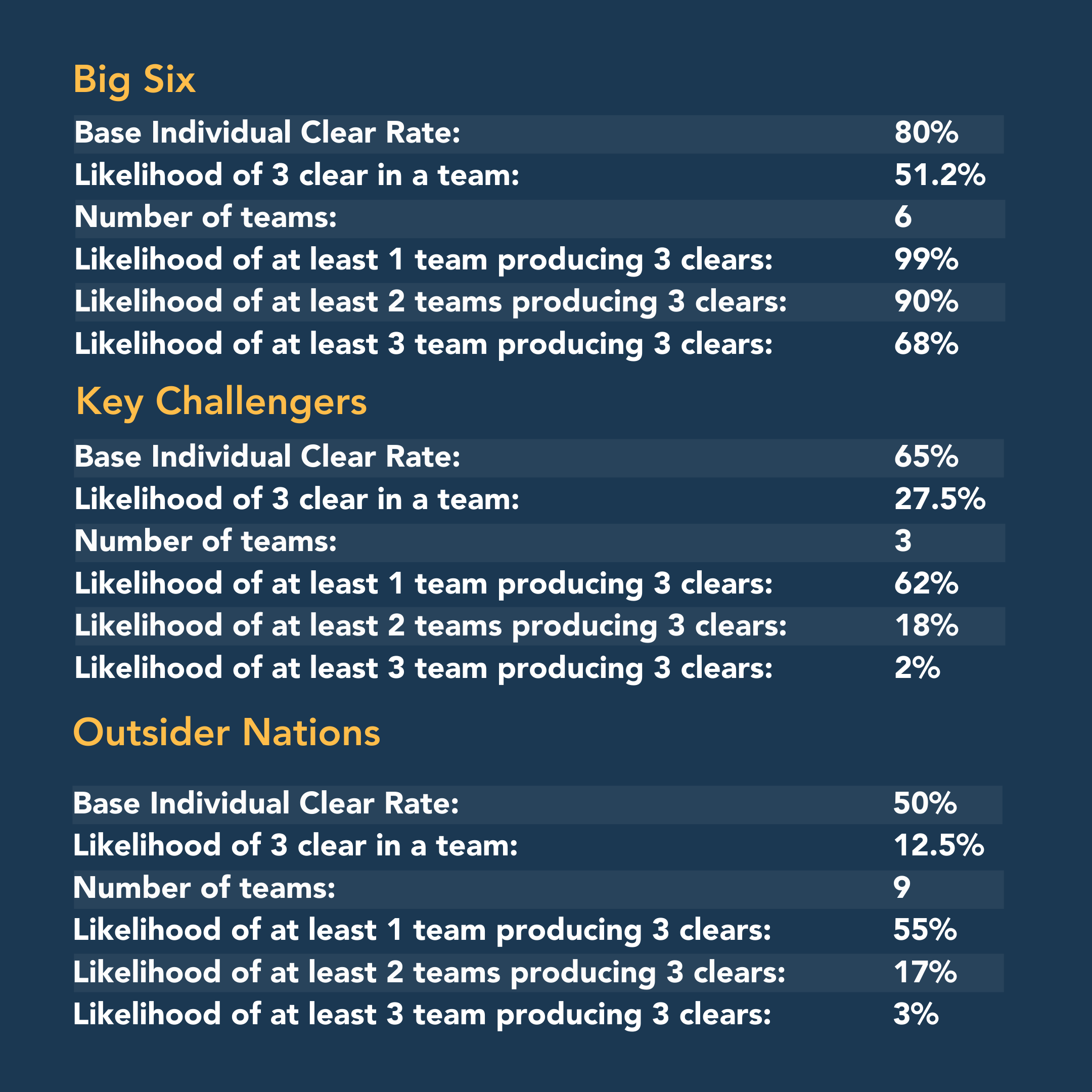 THE HISTORICAL STRANGLEHOLD OF THE BIG SIX 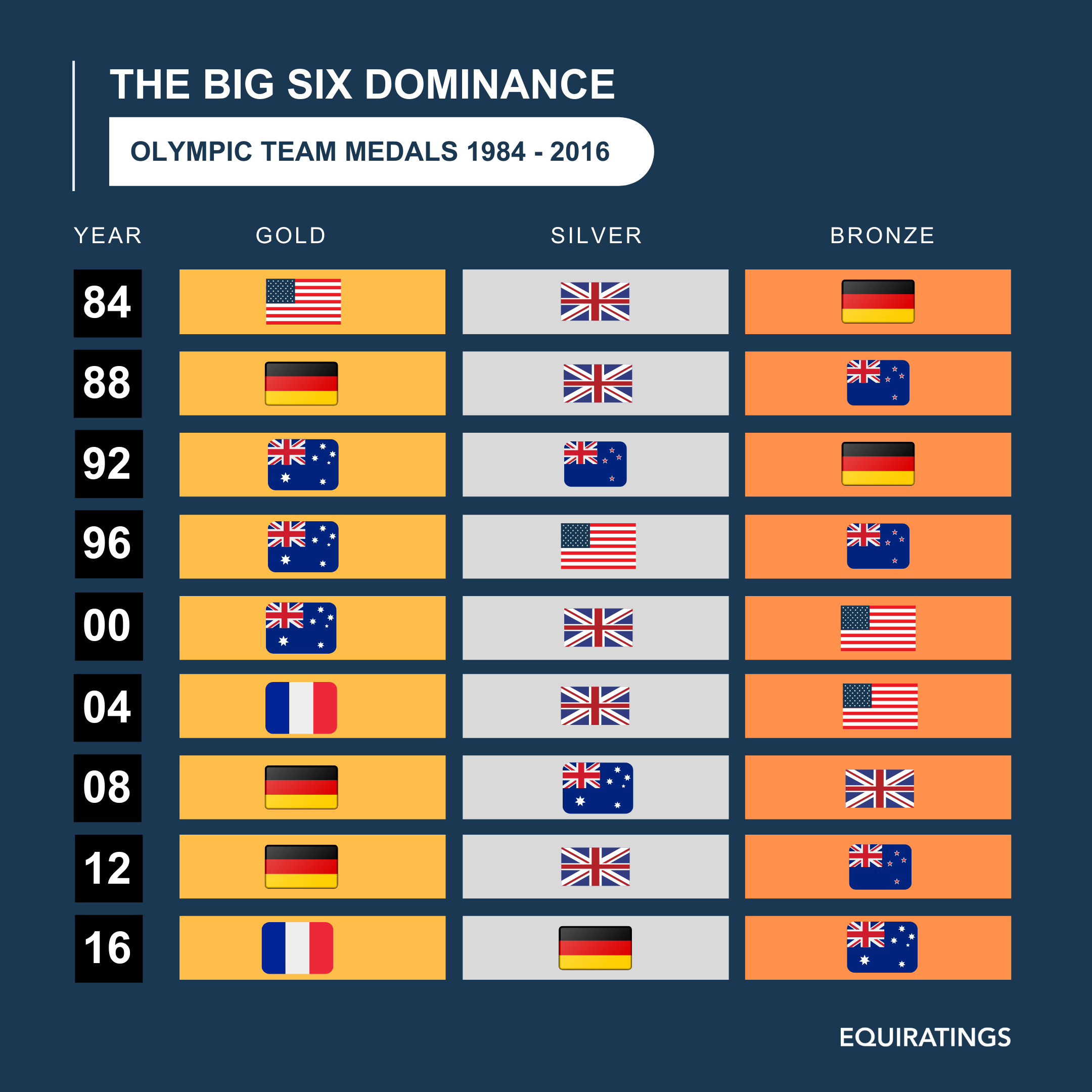 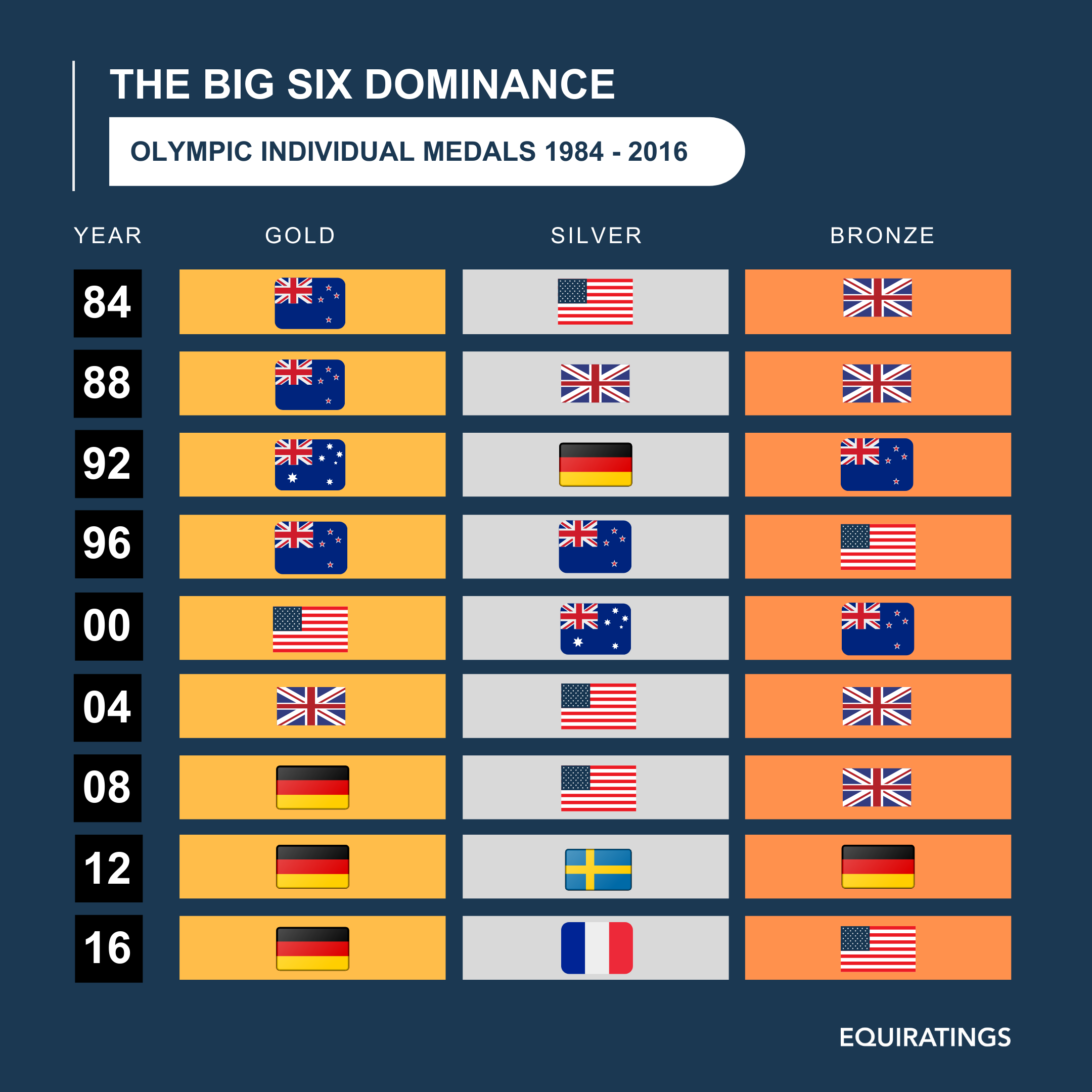 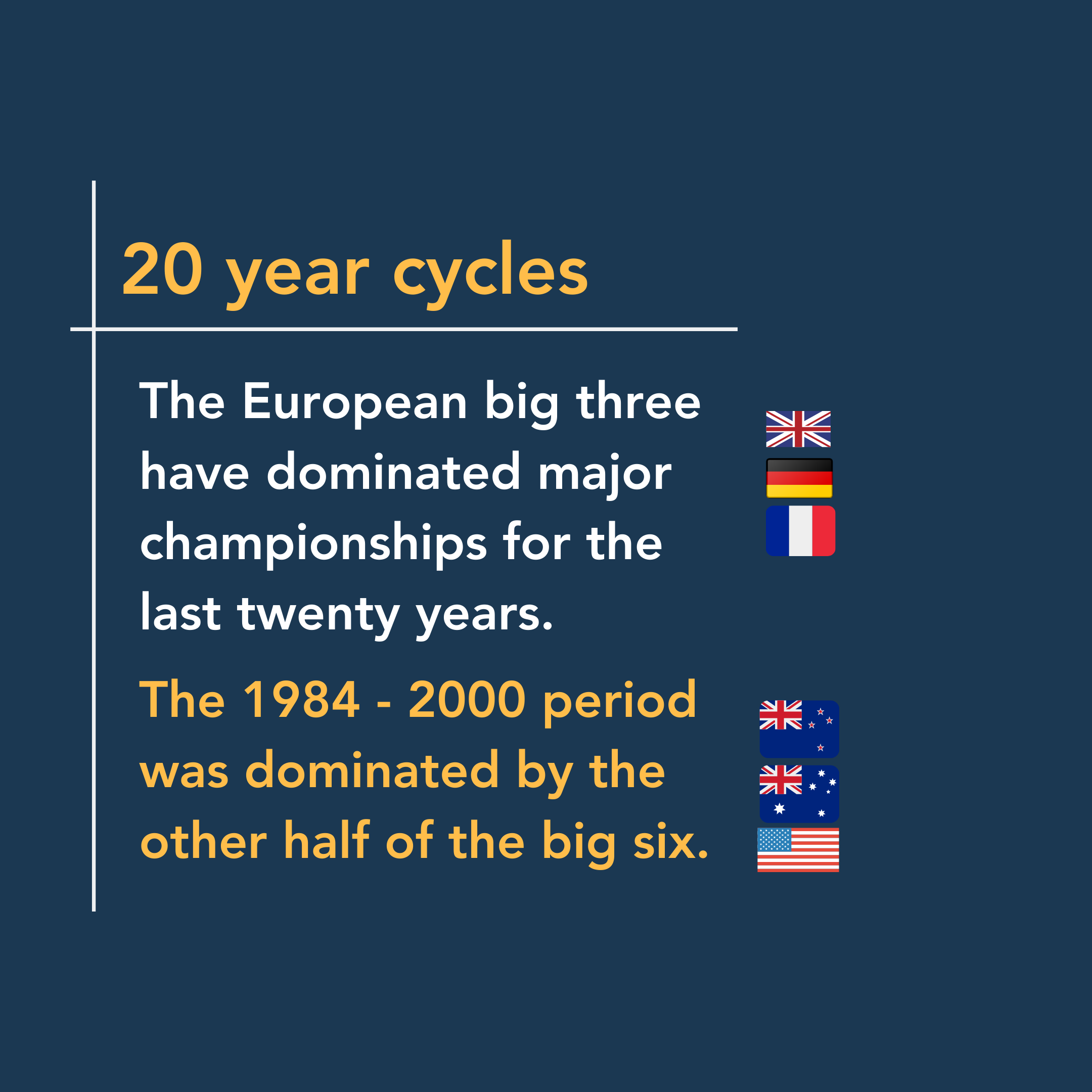 While the Australians dominated the Olympics in the nineties, the Kiwis were dominating the World Games. Individually, New Zealand took gold on all three occasions -Blyth Tait (1990 & 1998) and Vaughn Jefferis (1994). New Zealand also claimed the team gold on two of those occasions (1990 & 1998). Tina Cook featured on a British team which took the WEG team title at The Hague in 1994. The USA took the team gold at 2002 World Games and are therefore the last non-European nation to win that gold medal. 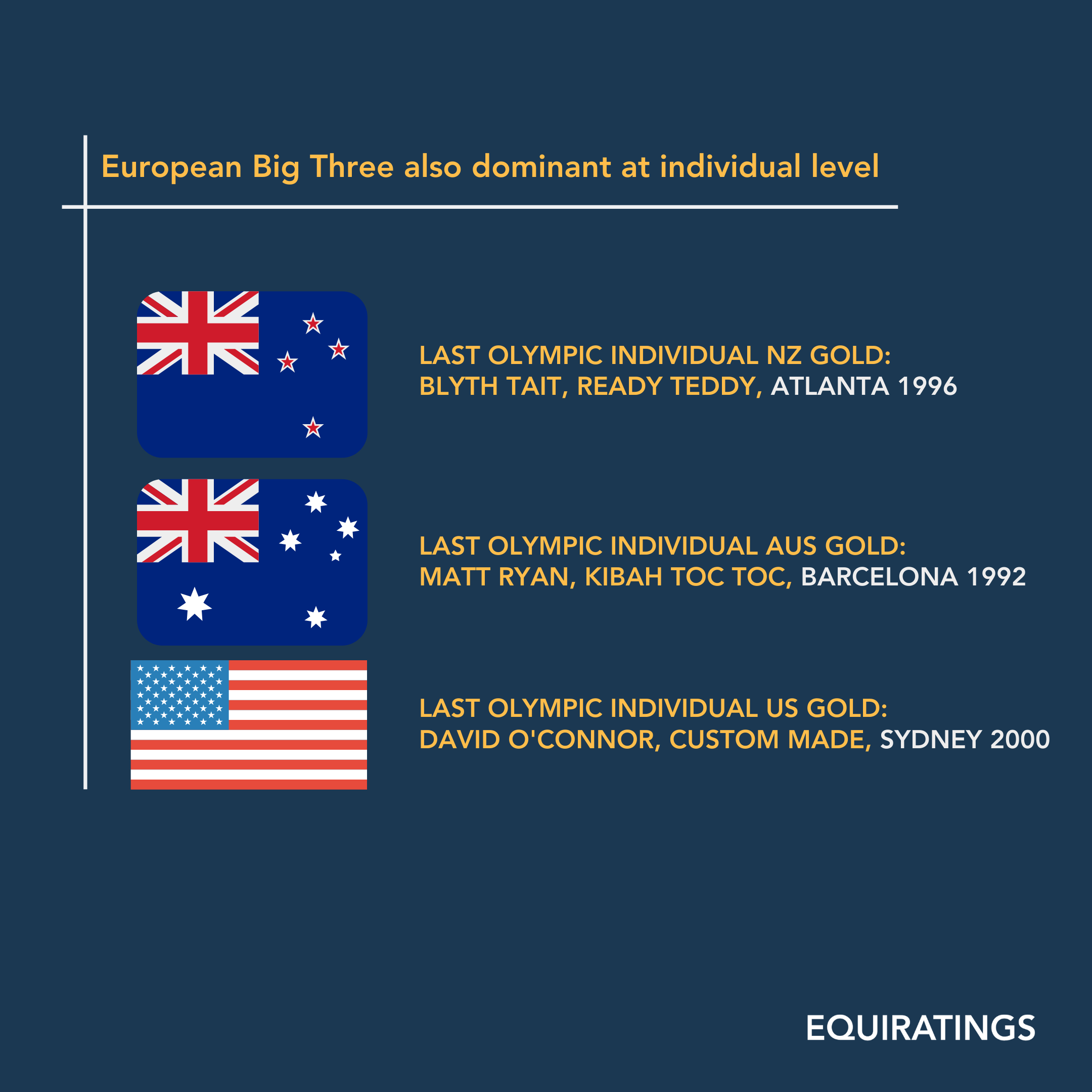 The landscape has been dominated by these six nations for decades. We examine whether or not Europe’s current grip on gold medals can be defied in Tokyo, and whether or not we could see a new flag challenging for Olympic team podium success for the first time in 40 years. 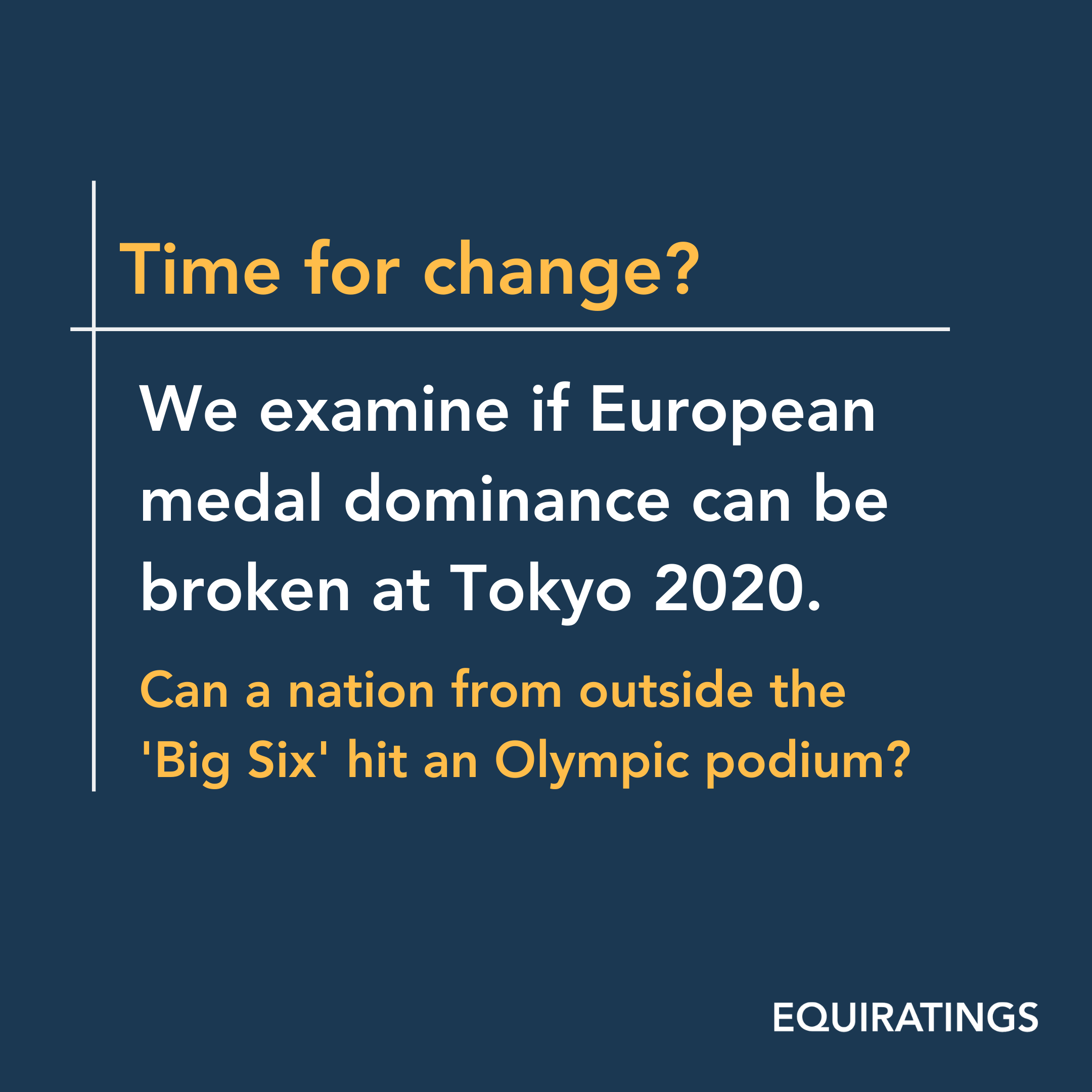 THE TOOL - KNOW YOUR FINAL SCORES

Going through the key contenders from every nation would require dissertation rather than an article, so we will adopt one of our standard overview analysis tools for this exercise. We call it ‘Zone Analysis’ and it’s a very familiar one for our high-performance clients. You can break each phase down in to scoring zones, but for the purposes of this article we will stick to the final score analysis, for which there are nine scoring zones. You can see these in the graph below which shows all competitors at all five-star competitions from 2017 to September 2019. 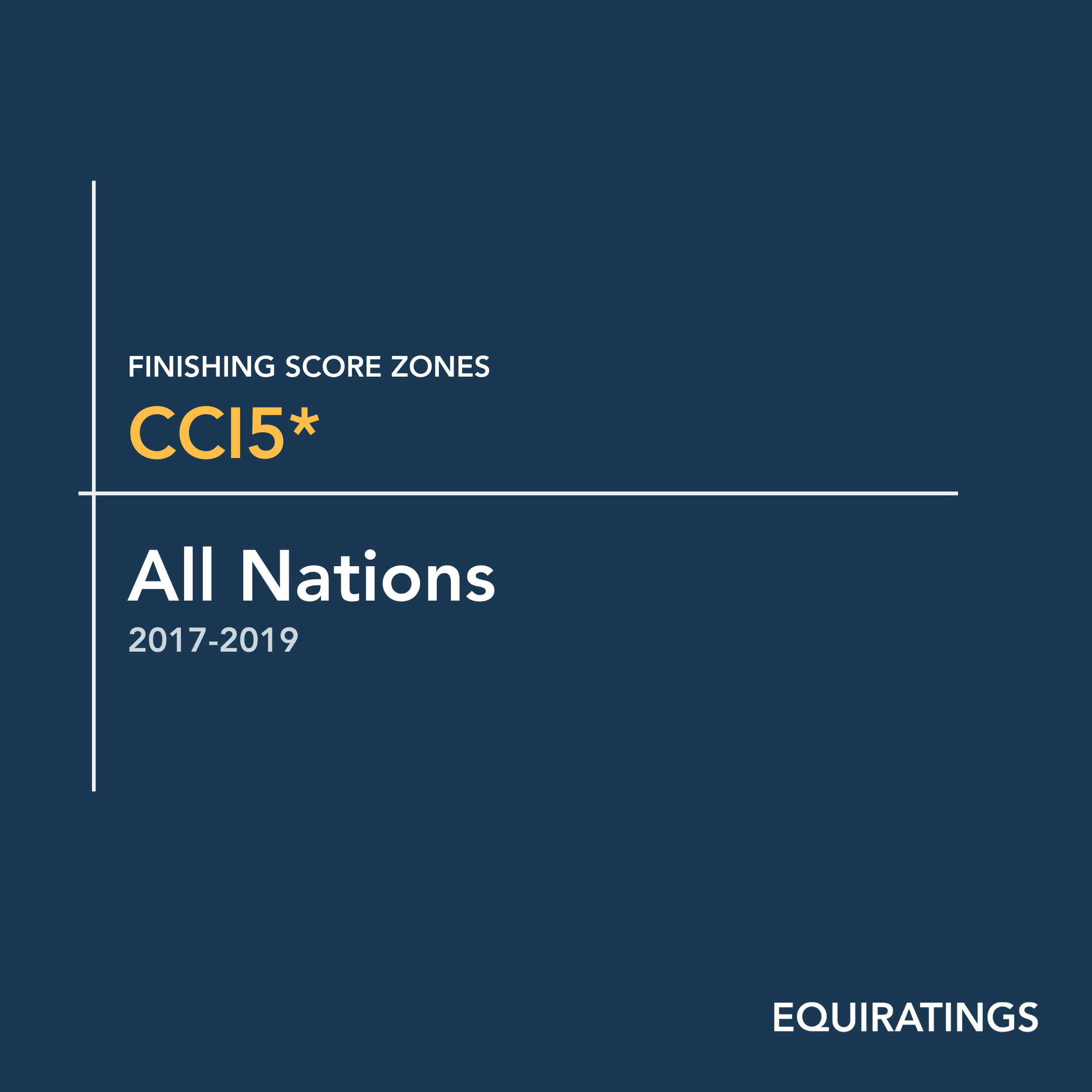 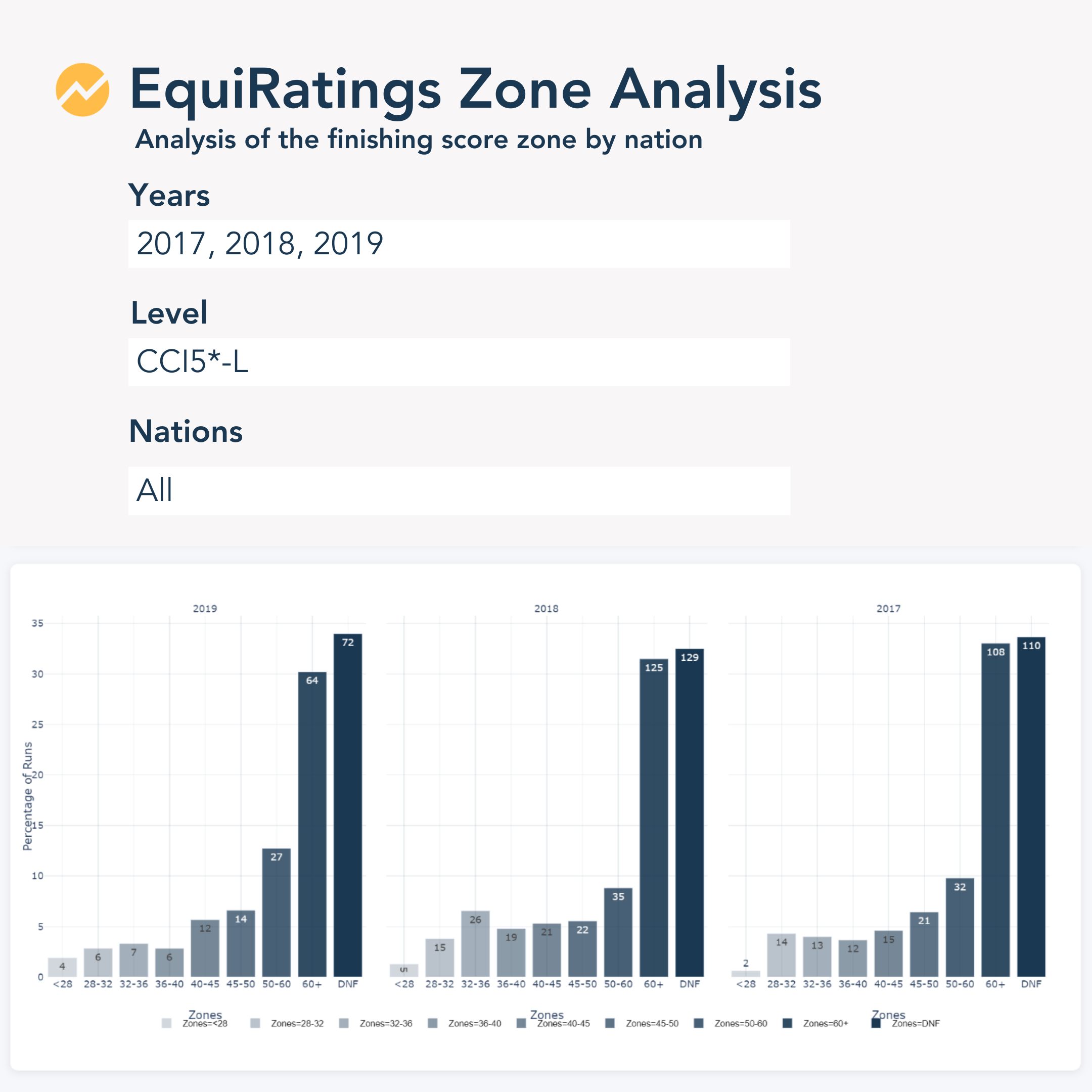 The best zone is the ‘sub 28’ zone, and these are rare occurrences with only 11 in the last three years at five-star. The worst zone, ‘DNF’ (did not finish), is common and occurred at a frequency of over 30% in all three of the years shown at five-star.

Zone analyses only assesses combinations that started the cross-country phase, so early withdrawals are not included on the graphs. While the cross-country at Olympic level has dropped to four-star difficulty, the removal of the discard score in the new team-of-three format is game-changer in terms of having to endure that painful and dream-shattering DNF outcome.

In 2016, it was France, Germany and Australia who flew home from Rio with medals. Let’s consider how these three nations are currently shaping up to defend their medals in Tokyo by looking at all of their four and five-star results from 2018 and 2019. 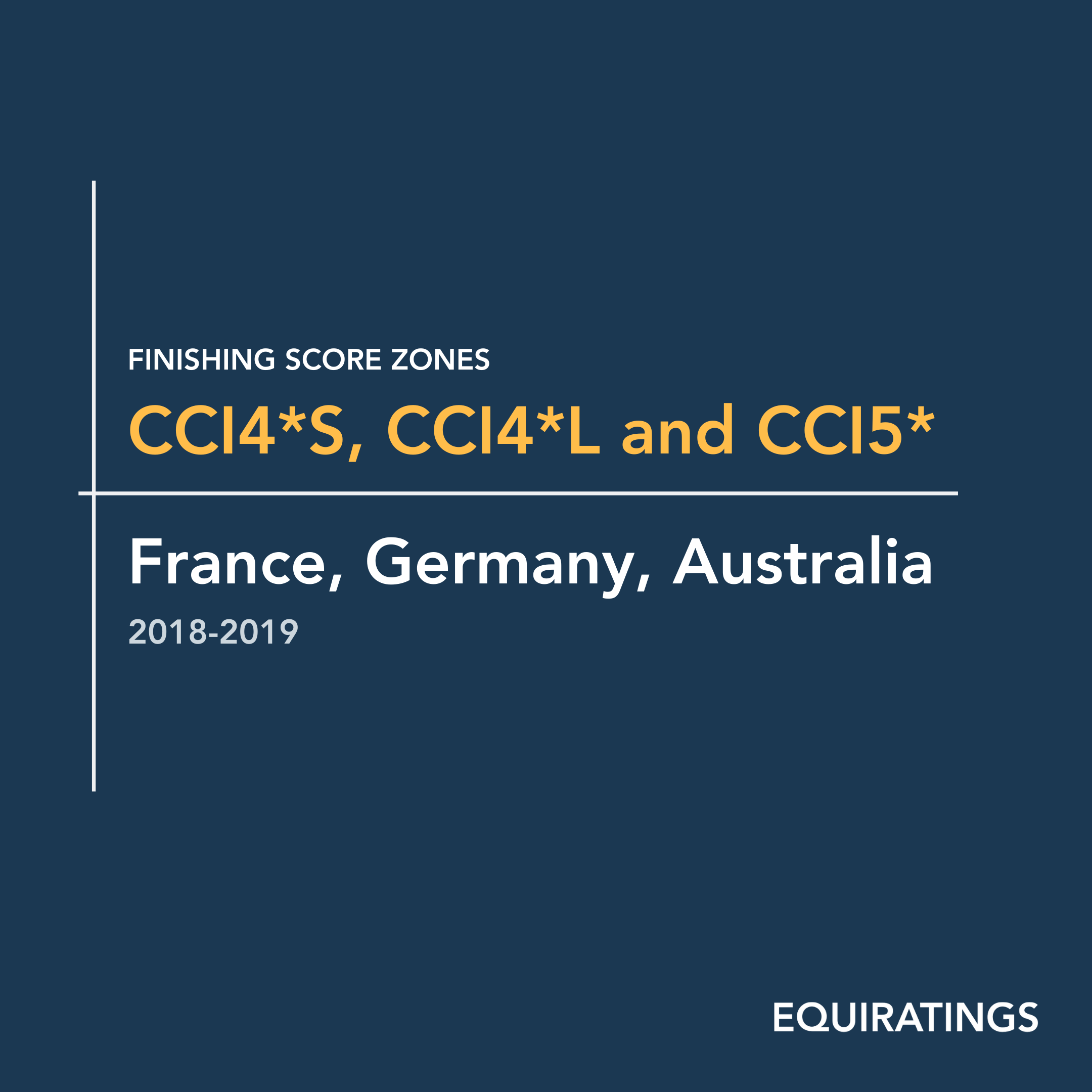 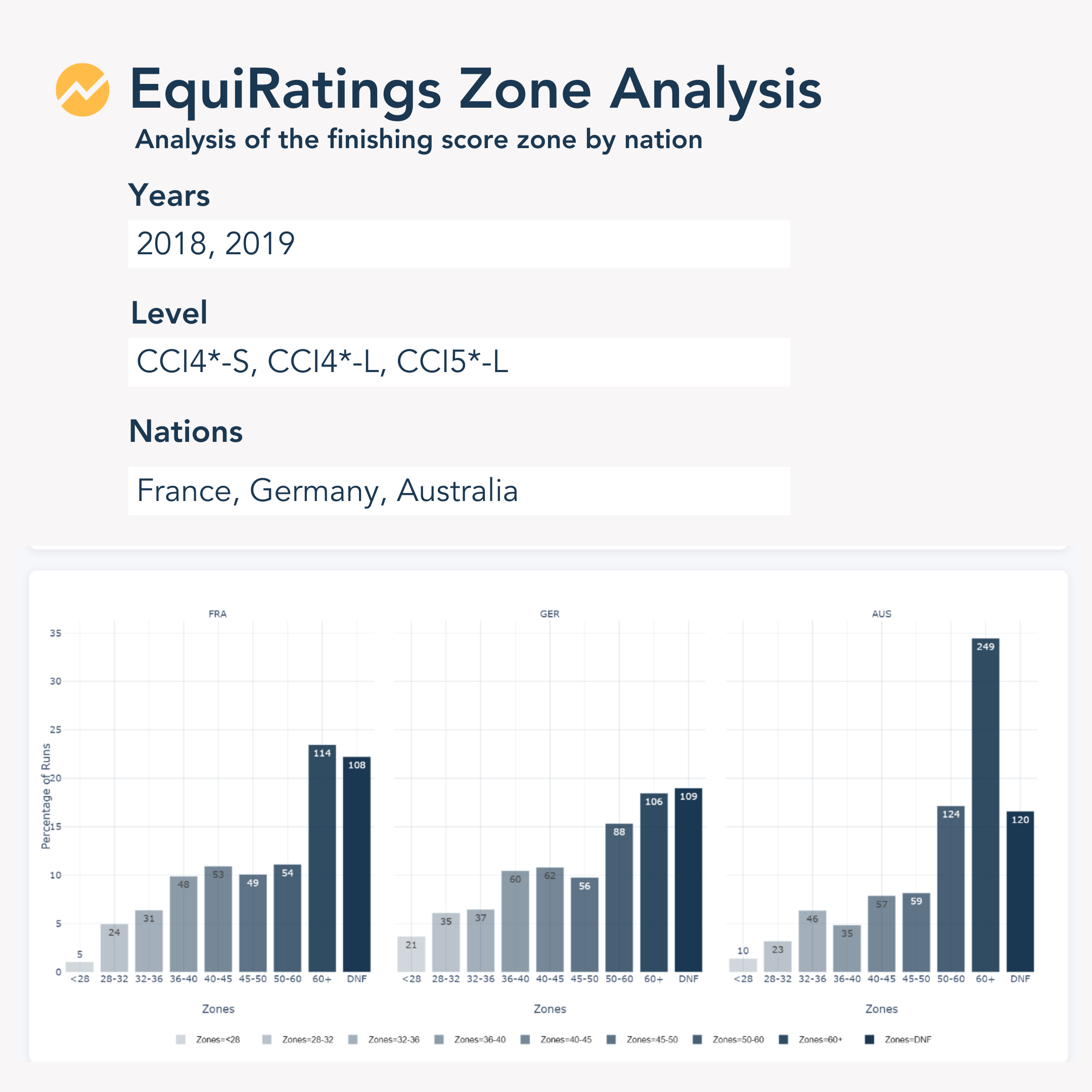 Germany have registered a phenomenal 21 ‘sub 28’ finishes, so they look to be leading the assault of that individual gold medal. Along with Australia, they are keeping their ‘DNF’ zone below 20%, but Germany’s ‘60+’ zone is also impressively under control coming in below 20% as well. The three left-hand zones, ‘sub 28’, ’28-32’ and ’32-36’ are critical for team medals, and Germany have both a high quantity and a high hit-rate in these territories. France might lack a bit of individual gold medal firepower, but their mid to low range is well stacked and the reigning gold medallists will be a serious player. You can’t discount Australia either who look to have some depth in the ‘32-36’ zone, so expect them to be genuine podium contenders.

THE OTHER POWER NATIONS 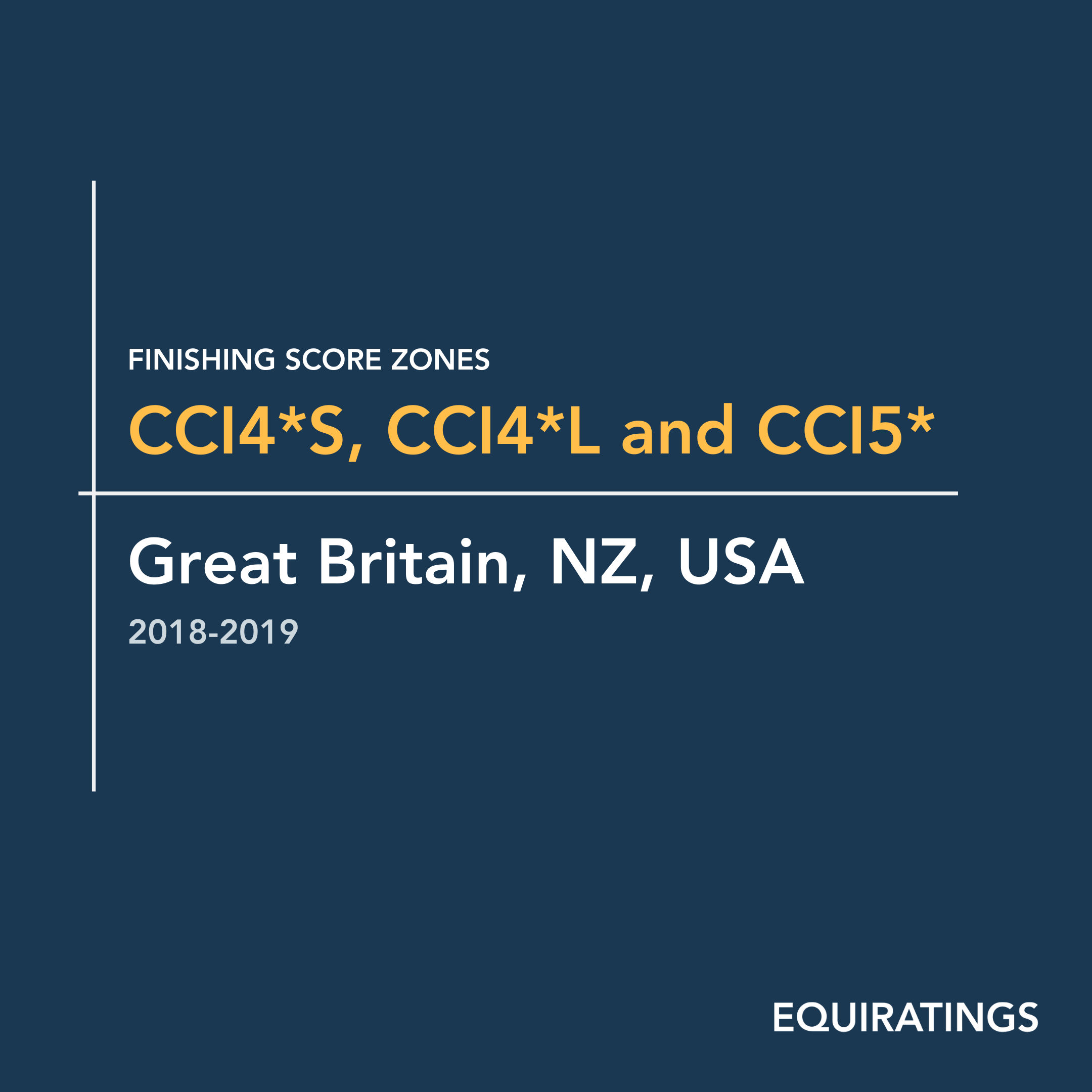 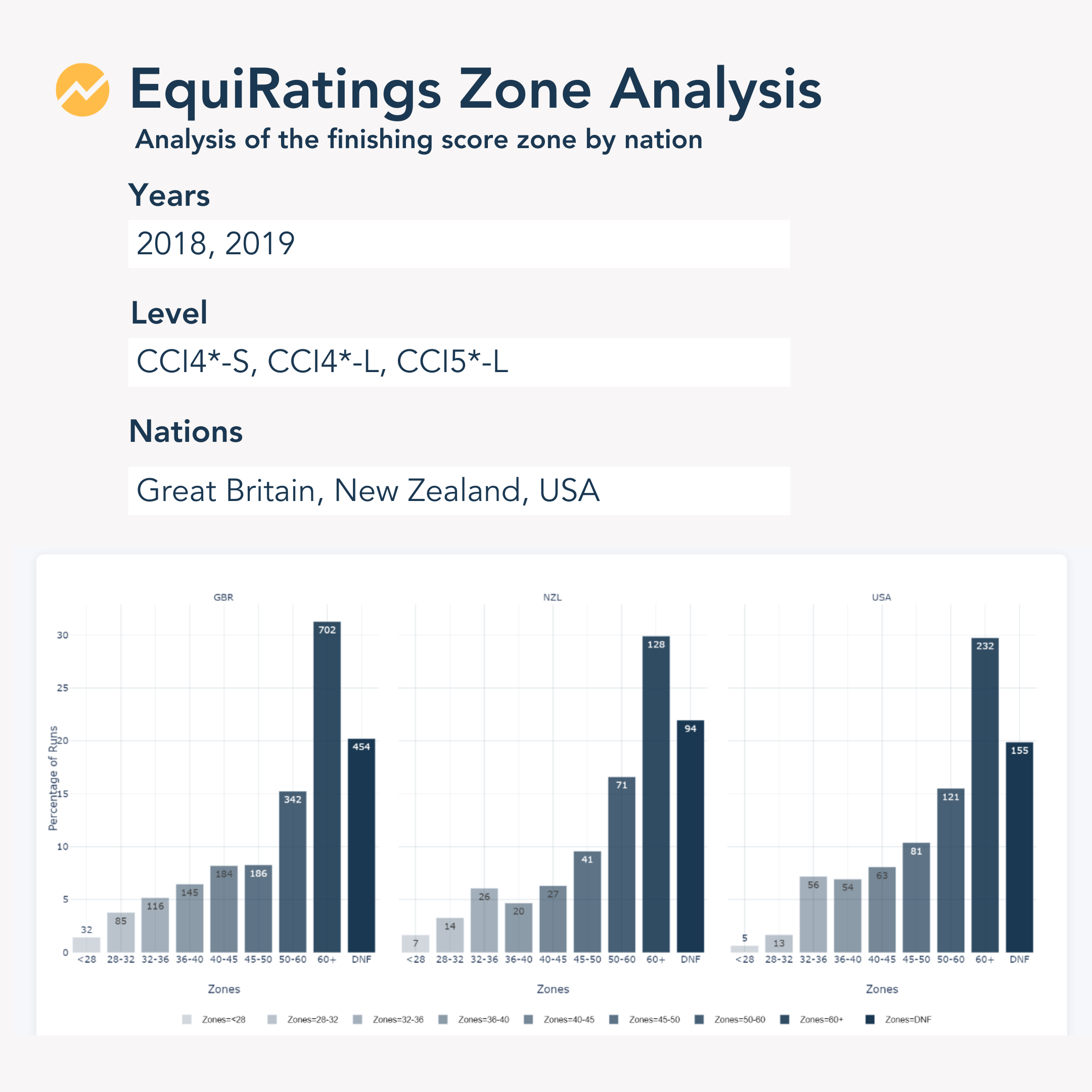 Great Britain were undefeated under Bartle until the Europeans this summer when Germany took advantage on home soil. Nevertheless, these two powerhouses of European and world eventing will dominate the market when it comes to determining the favourite for team gold in Tokyo. Great Britain have numbers and depth like no other nation. The graph below shows 32 ‘sub 28’ finishes and a mind-blowing 85 results in the ’28-32’ zone. Team GB will head to Japan with three in-form combinations and a reserve that would almost certainly be guaranteed a place with almost any other nation. They will be ready, but can they deliver?

The 60 seconds in eventing history that Kiwis will want to forget is the jumping round which took New Zealand from team gold, to team silver, to team bronze and ultimately to no team medal at the Rio Olympics. I personally know that failure can light a more fervent fire than anything else, and I fully expect this nation to once again deliver a far stronger punch than their population size would suggest. Their zone analysis puts them right in the mix with Australia and France, and it is almost impossible to separate these power nations in the position of third favourite for the team medals.

Team USA have landed finishes in the top two zones and they are a nation which has the ability, the resources and the hunger to put themselves back on the podium. In percentage terms, like New Zealand, they look strong in that ’32-36’ zone which makes them serious candidates to pick up a silver or bronze team medal, particularly if they take a strategy that weights reliability ahead of an all-out assault.

THE MAIN CONTENDERS TO UPSET THE BIG GUNS

40 years is a long time in sport, and there are three nations with really genuine chances of upsetting the big six. Two of them have won team medals in the last two years and the other is the host nation who have been building an impressive CV at the top level of the sport ever since they won the bid to host the Games. Next we look at Ireland, Sweden and Japan. 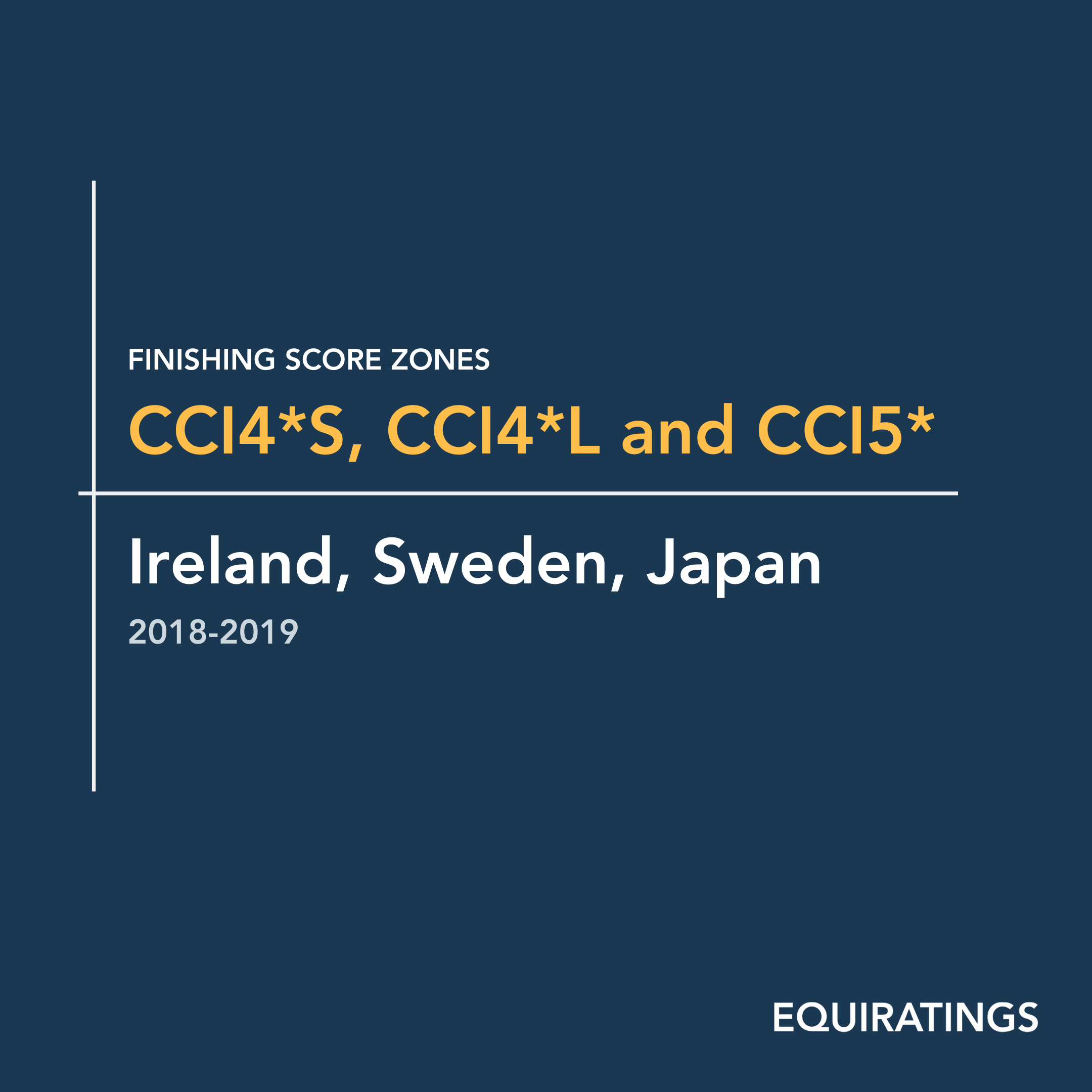 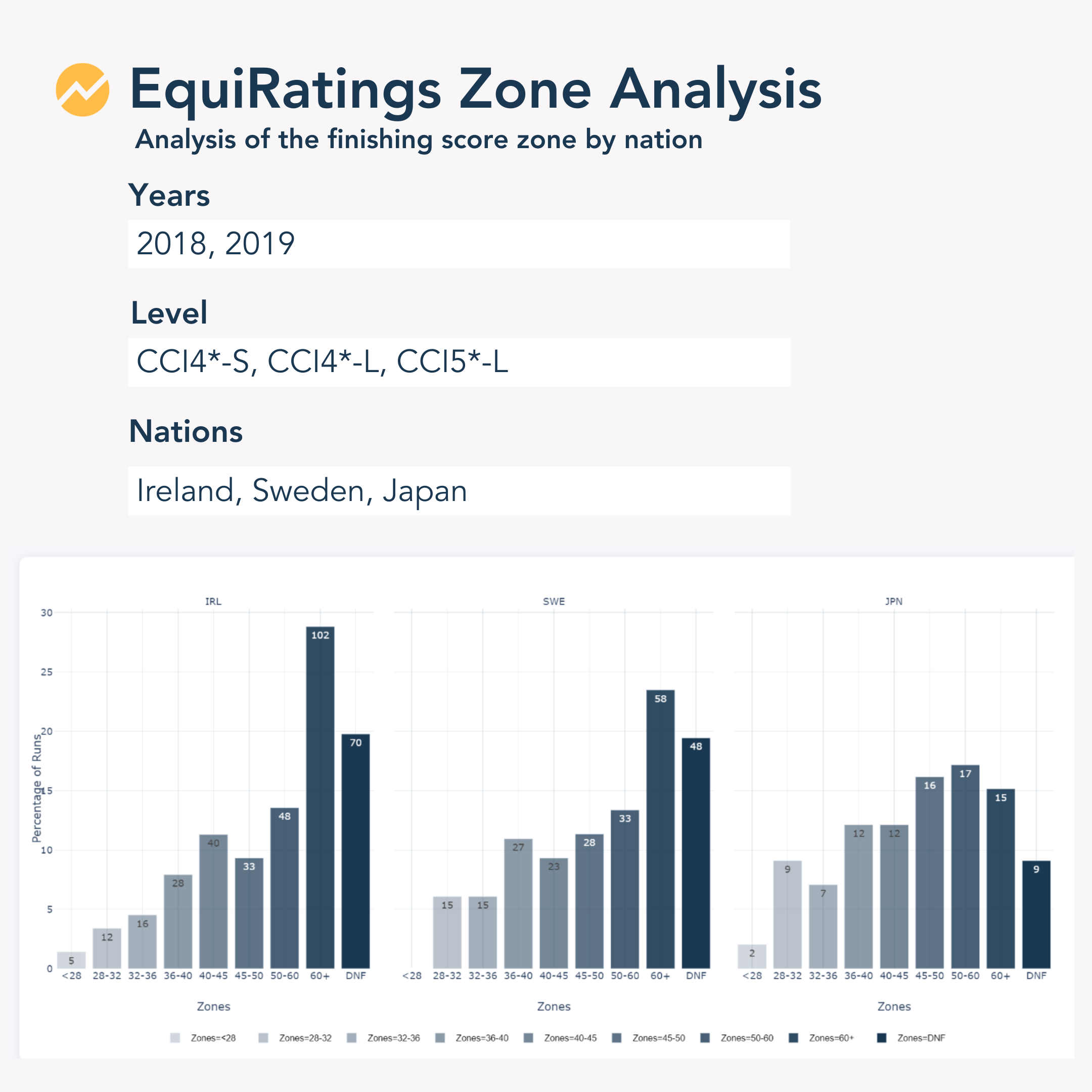 Ireland, like the USA and France, can boast five ‘sub 28’ finishes in the two-year period. One of those was an individual silver at the World Games, and one of their 12 ’28-32’ finishes was an individual bronze medal at the European championships. Ireland have built up a solid profile of results that has them looking every bit as strong as the big six nations such as NZL, AUS and USA. The confidence Ireland took from their recent WEG performance means coaches, riders and owners return with a clear purpose in their ability and they are certainly not outsiders to bring back more silverware. Sweden and Japan are in a similar mindset.

Sweden are the first nation so far to draw a blank in the ‘sub 28’ zone, but they have 30 results in the next two zones and they are evenly split. In Tokyo, three results in those zones will be highly likely to land a podium finish. Japan have the lowest number of results (18) in these first three ‘medal’ zones (Finishing Scores sub 36), but look at their ‘DNF’ rate - below 10%. They are clinical, they are consistent and they can land a punch. On home soil, a first ever team eventing medal for Japan at a major championship? Bring ear plugs…!

Italy, Poland and Switzerland they will be taking the drop of the discard score as a threat to their opponents and a boost to their chances. All three nations can boast some very creditable performances over the past two seasons of top-level competition, but they will need their very best to be available and they will have to deliver in order to challenge the nations mentioned so far.

Italy look the strongest of these remaining European countries with nine results in the top three zones. Poland are the only member of this group that have landed a ‘sub 28’ finish at four or five-star across 2018 and 2019 so far. The threats of ‘60+’ finishes and DNFs are very real, as they are for most nations, but with a team of three and all scores counting, a medal bid could unravel quickly in August 2020. 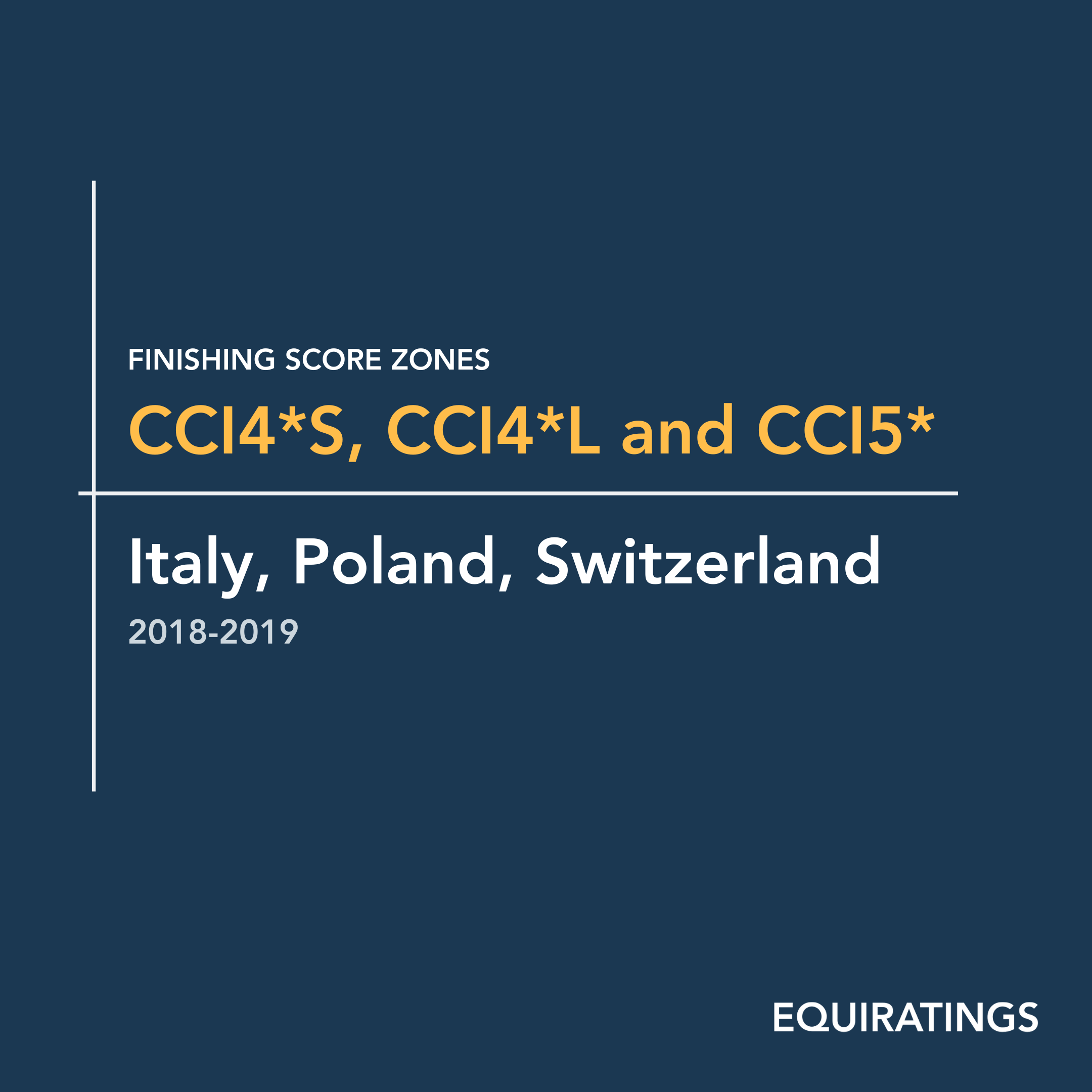 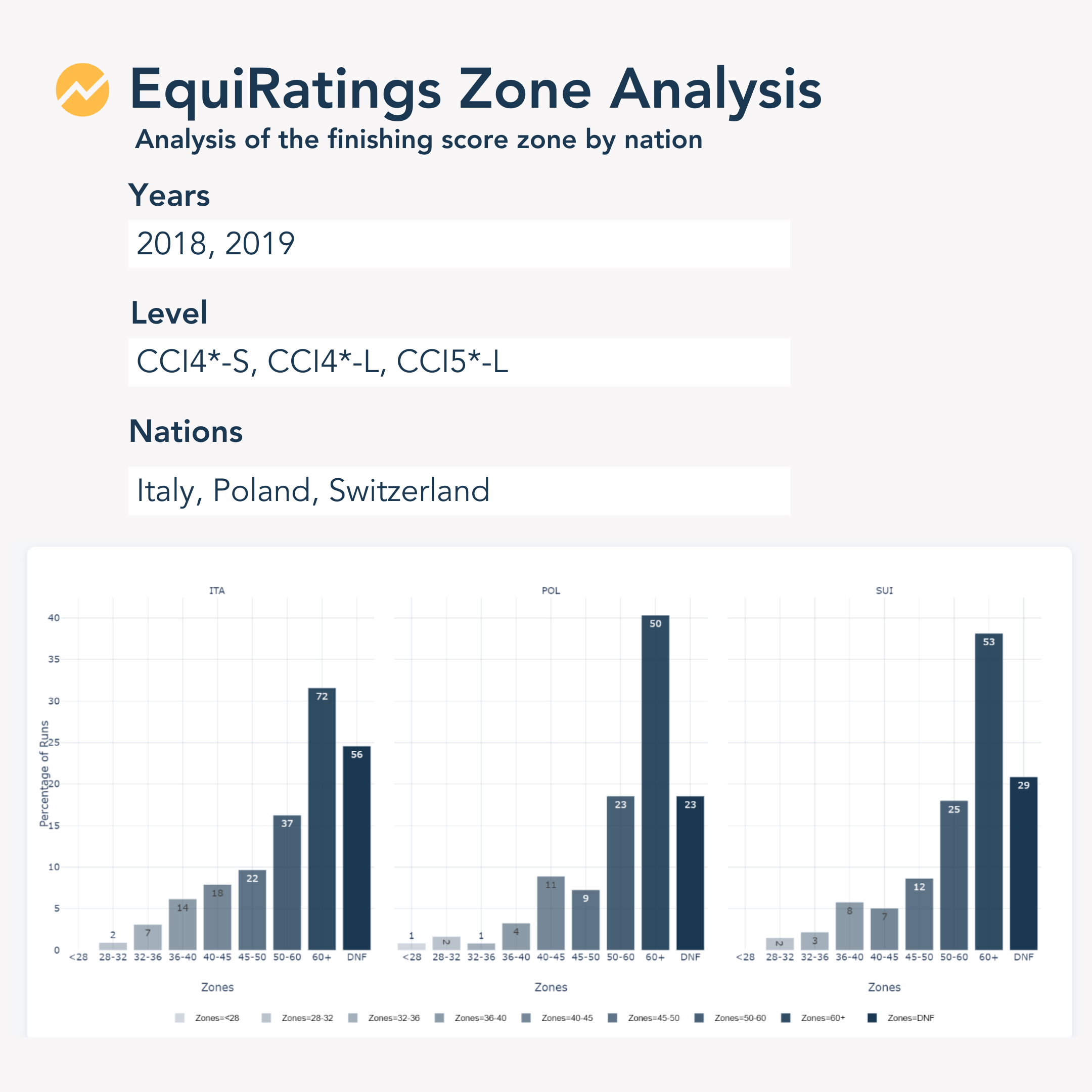 THE REST OF THE WORLD

These final three nations all qualified at the three-star level and so they have likely been saving their top-level firepower for later in the day. The are all facing a race against time to qualify three combinations for Tokyo and secure that team place by the beginning of 2020. China and Thailand have benefitted from Japan (hosts), New Zealand (WEG) and Australia (WEG) all qualifying at the first possible stage in the process, thus opening up more spots in their regions. Traditionally strong eventing nations such as Belgium, the Netherlands and Canada will take little comfort from the argument that new faces in the team event will bring interest from a greater reach across the globe.

Brazil took their place at the expense of Canada, and China have been building a team from a base in Europe. The zone analysis for these nations at the moment won’t be worrying the key contenders for team medals, but one of these countries could make a name for themselves by knocking on the door in 10 months-time. 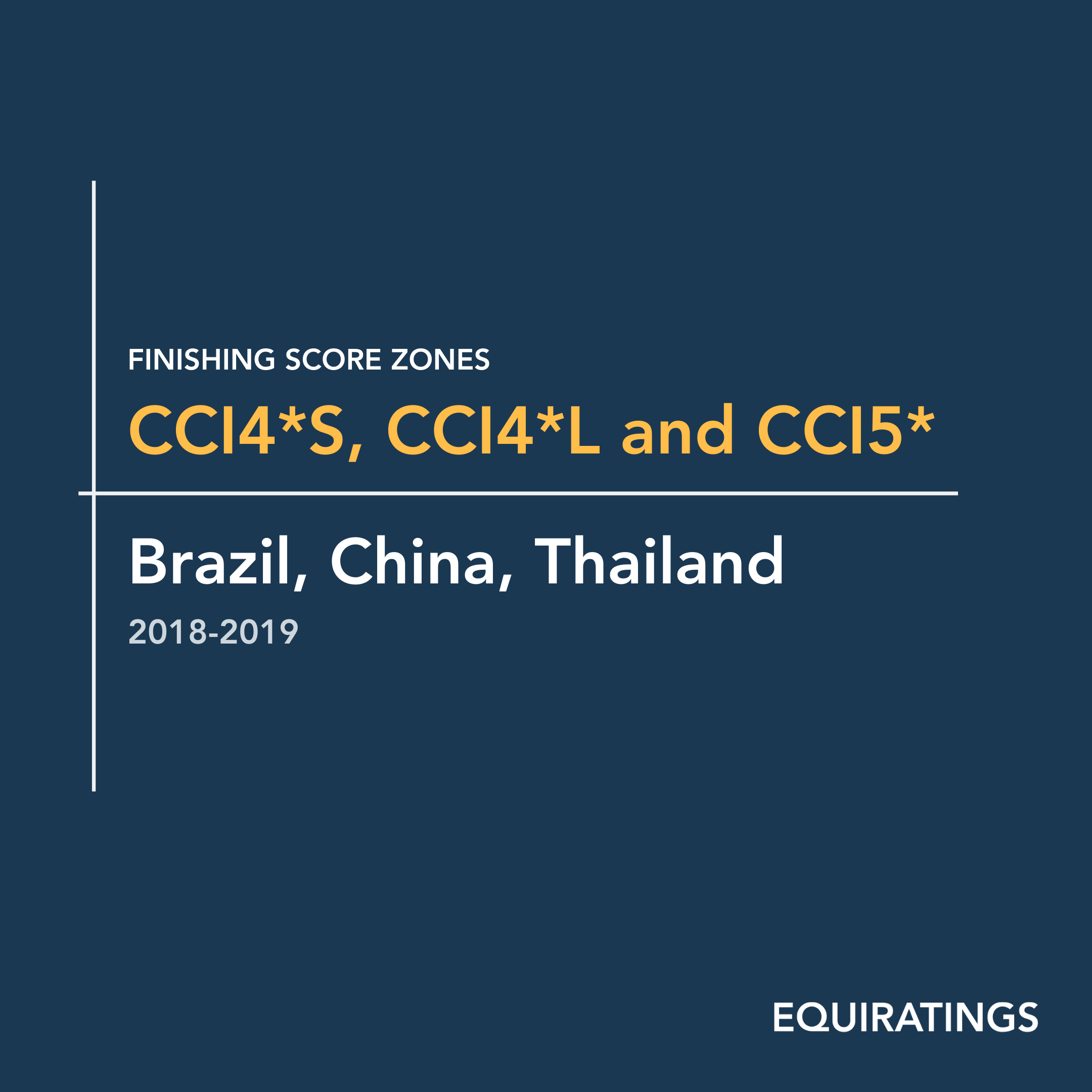 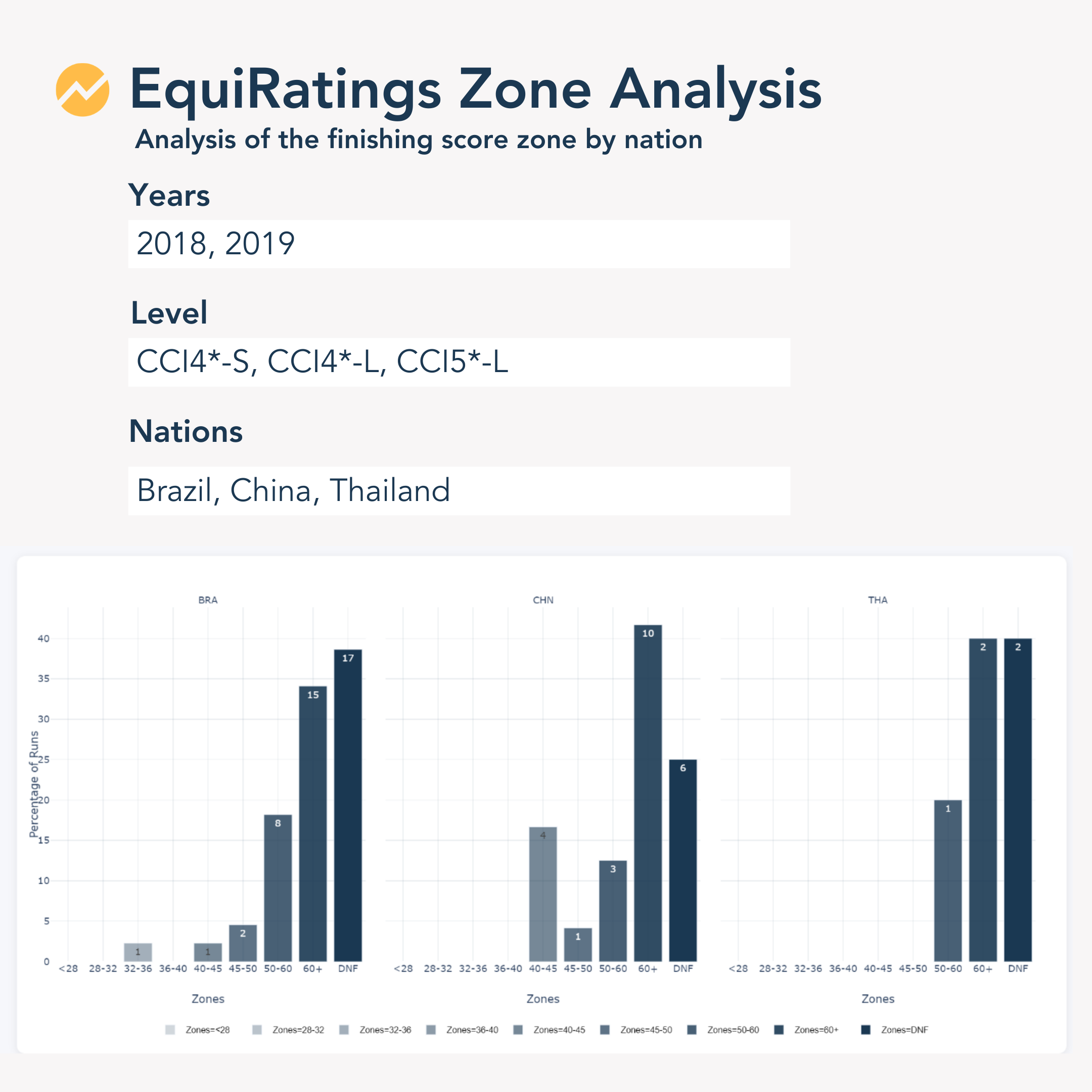 More insights from the EquiRatings lab 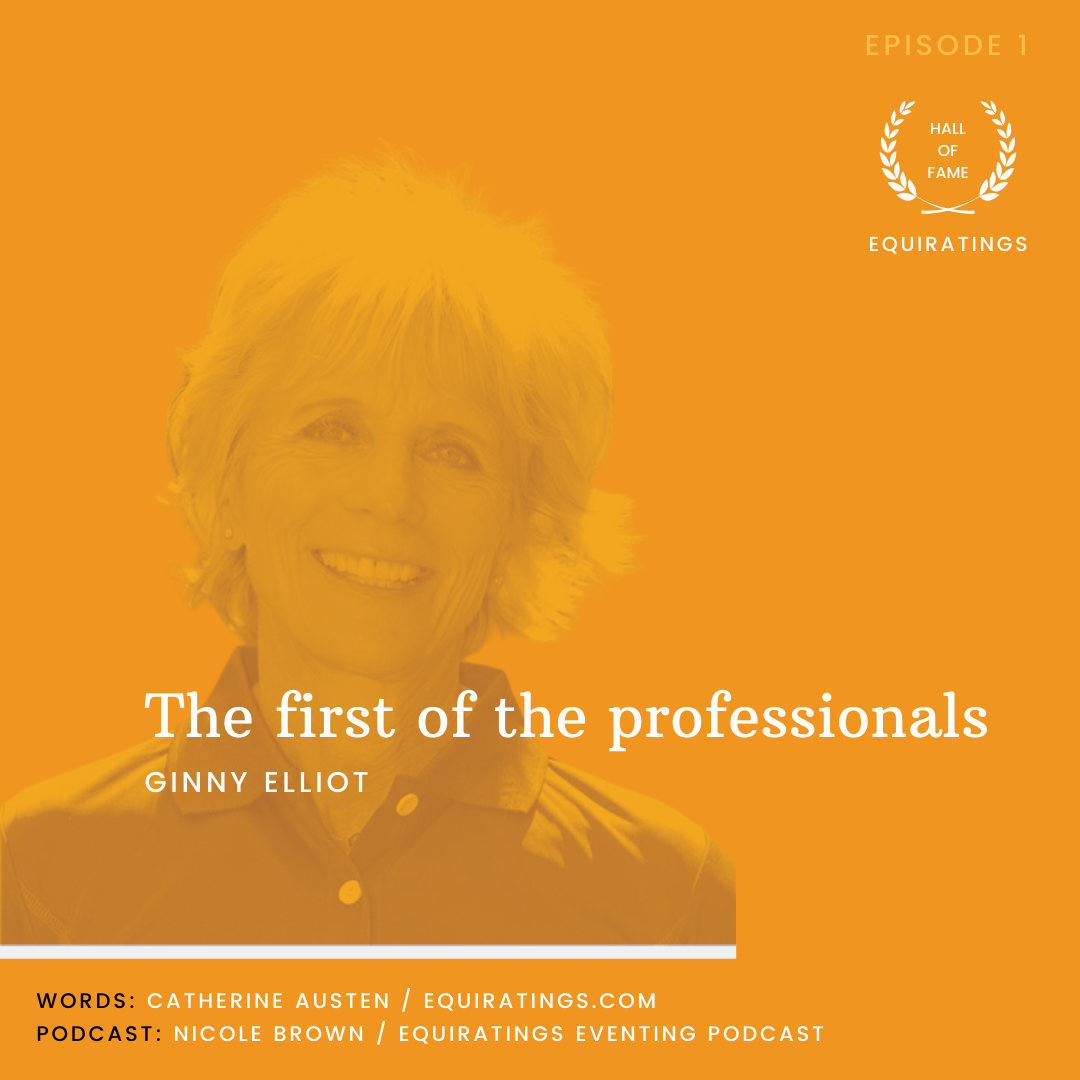 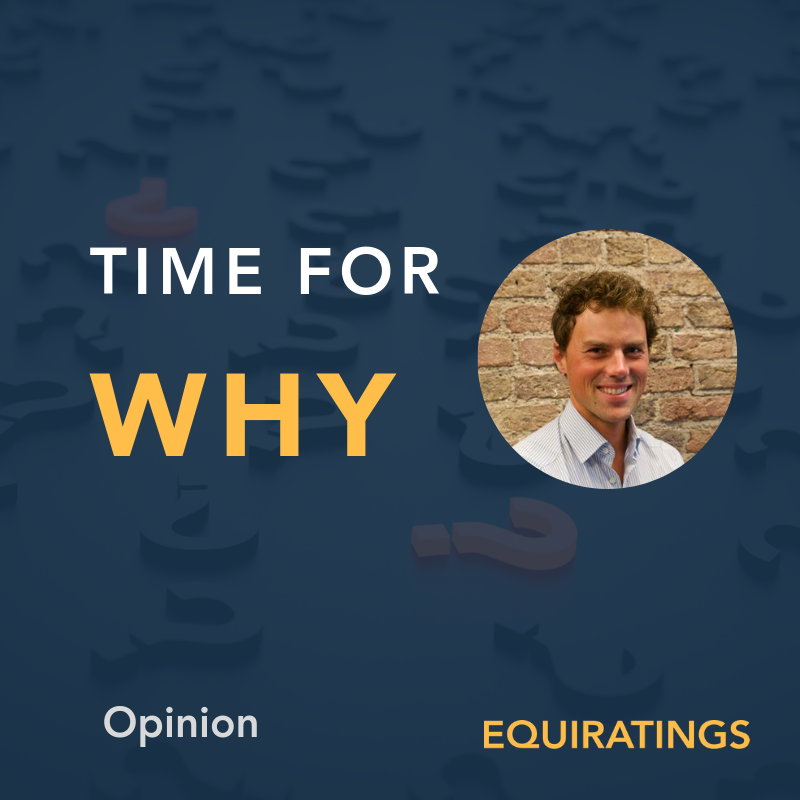 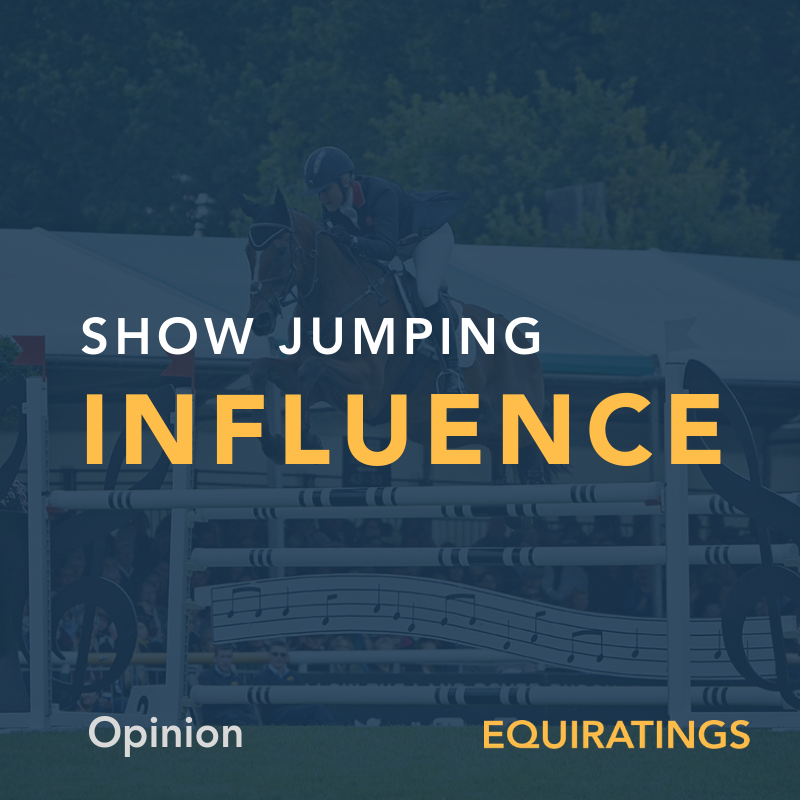