The Jumping Elo has been a strong-performing metric since we first launched it. As initially developed, it performed as the best single metric when looking at things like:

However, we kept an eye on optimising the Jumping Elo even further and had a few ideas of where it might be improved. This has resulted in some tweaks to the metric going into 2022.

We have tweaked the Elo in two main areas:

Modelling jumping performance and how best to measure Elo performance

Classically, performance of the Elo metric is measured using a score called the Brier Score. This measures how well a metric predicts probabilities. In Elo, this is measured by how well the Elo ratings predict the probability of head-to-head matchups in jumping. For example, say Horse A is likely to beat Horse B 75% of the time. This probability can be calculated directly from Elo ratings. A core component of the Elo algorithm is proposing that horses’ abilities are logistically (can approximate as normally) distributed around their Elo ratings, and that we can compute the likelihood of winning a matchup based on comparing the distributions for each horse.

However, in jumping, horse ability – proxied by scoring/performance on the day - is likely not perfectly described by a logistic distribution. Some of this comes directly from the scoring format of the sport; it’s not a continuous score, but rather mainly driven by a discrete number of poles knocked. There is also a relatively hard upper limit to performance in that a horse can’t score better than 0 penalties (at least until the jump off round).

One way of measuring the non-logistic distribution of horse ability is by looking a horse’s actual performance on the day as measured by the position percentile (i.e. placing in the top 5%,10% or 50%, etc). We can take a horse that has had between 15-20 runs and only consider horses of a similar experience/point in their career. We can then rank them by their average position percentile to date, and look at their performance on the day relative to their average performance to date. If performance were well modelled by a logistic curve, we might expect to see something similar to a bell curve. However, as shown in the graph below, we see a much flatter distribution. Some of this is a limitation of measuring performance by position percentile in that it’s bounded between 0 and 1, but some of it is due to jumping performance not being normally/logistically distributed.

Average Position Percentile vs Position on the Day 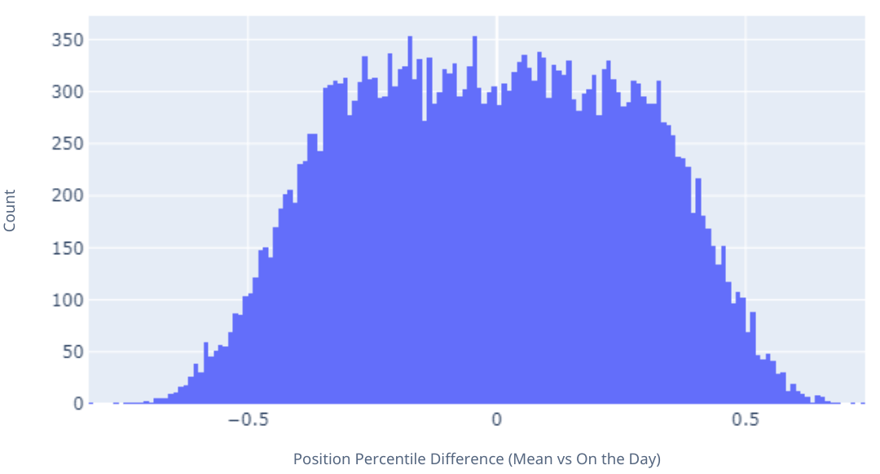 If jumping performance were well modelled by a logistic curve, we might expect to see something similar to a bell curve. However, as shown here, we see a much flatter distribution.

For these reasons, it’s best not to use only the Brier Score when developing the Elo. Since the model does not really describe the performance distribution, our predicted head-to-head percentages will be somewhat off.

A Brier Score can be decomposed into 3 main pieces. Uncertainty, Reliability and Resolution. Uncertainty is a measure of how uncertain the base problem is (we are measuring head-to-head matchups, which have a default probability of 50%). Reliability is how well the predicted probability correlates to actual observed outcome probabilities; does the 75% prediction actually come true 75% of the time? Resolution is how much the predicted probabilities differ from the average. Resolution closely mirrors another metric known as the ROC AUC (see graph below). ROC AUC measures how well the Elo separates winners and losers of head-to-head matchups. This metric suits our use case better, where we care more about ranking horses by their head-to-head Elo comparisons and less about predicting the precise probabilities of those head-to-head matchups. 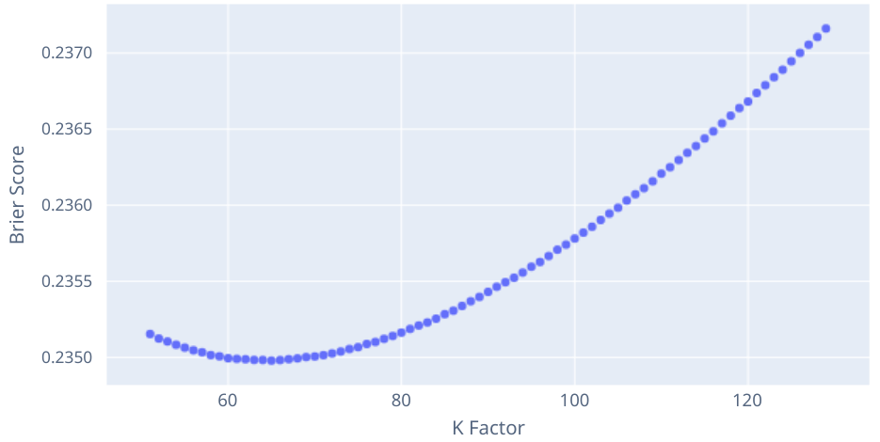 We aim to minimise Brier Scores, so K factors around 65 would be optimal according to the above graph. 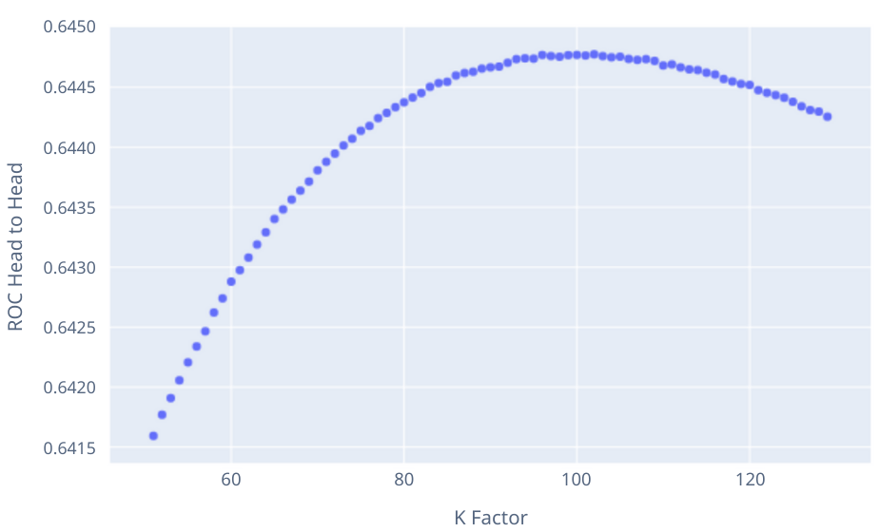 We aim to maximise ROC AUC Scores, so K factors around 100 would be optimal according to the above graph.

In the 2021 Elo formula, we had two different K factors. We had a larger K factor for horses early in their career (within their first 12 runs) and a smaller K factor for horses with 13 or more runs. When optimising the Elo, we went away from having a binary K factor based on experience. Instead, we looked at introducing a K factor that scaled with a horse’s Elo, the K factor gradually reducing the stronger a horse’s Elo becomes. This means that the stronger an Elo gets, the less it will vary based on the outcome of a single result. This type of adjustment leads to better performance, especially when measured under the ROC AUC. While it increases Elo inflation, making it slightly more cumbersome to compare Elos year to year, it does a better job of ranking horses by their head-to-head Elo comparisons.

We can see with larger negative slopes (the blue dots), ROC score improves compared to using no slope (a single K factor) as indicated by the yellow dots.

The second area where we adjusted the Elo was to put in a show level importance factor. This means we increase K factors for major competitions. The competition classing we use, with K factor percentage, is as follows: 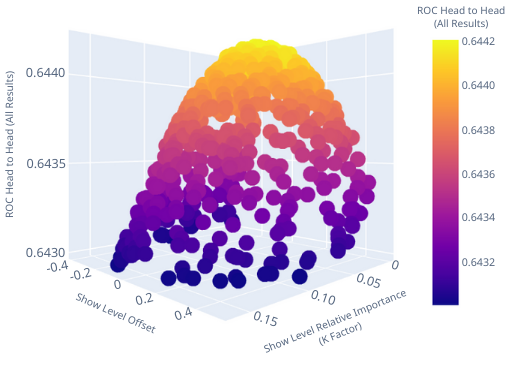 Adding in a show level K factor adjustment results in an increase in ROC AUC score measured across all results. 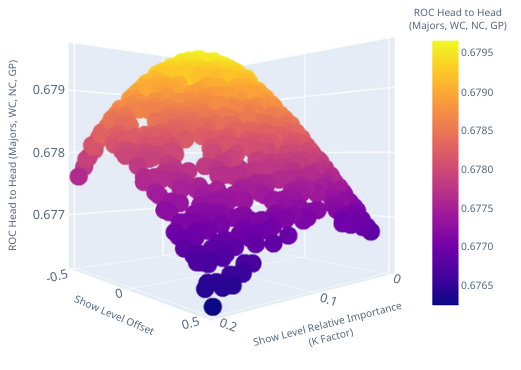 We've been highlighting the Jumping Elo on our social media. Stay tuned as we keep sharing the knowledge. Plus, eventing fans can check out our Eventing Elo.

Sean Murray is the expert data scientist at EquiRatings. He ensures all of our work is based in quality research and implements our scientific methods, processes, algorithms and systems. Previously he worked as a consultant with Deloitte.